Get in The Bloody Cycle Lane!!

If only comments from road users worked like Google Adsense. For every comment from another road user telling me to get in the cycle lane, not to filter etc I would get a credit. Perhaps the amount of credit gained would reflect the level of the aggression, the amount that their BP rose and the amount of swear words in the tirade. By now I reckon I could retire from my day job and head off to some sunkissed beach in the Pacific.

One of the biggest contributions to this situation is a lack of understanding. Those who haven't cycled before on urban roads (and I too was once in this position) don't understand why a cyclist might take the middle of the lane, might get annoyed at a car passing within a foot, or might filter to the front of the queue.  So I thought I'd tackle this issue myself, focusing on the one area that seems to create the most controversy. 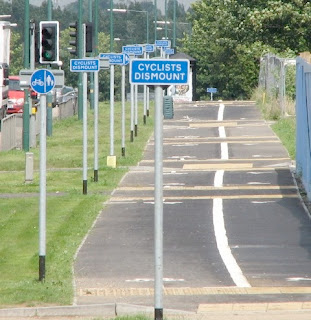 Why don't I always use cycle lanes?

On the face of it cycle lanes seem like a great idea. A designated part of the road set aside purely for the use of pedal cycles. It shows to everyone that cyclists should be on the road, and are welcome there. It also guides the cyclists as to the best road position and best riding practice.
Unfortunately in my and many other cyclists experiences they fail on all of the above.

Cycle lanes, lanes just as any vehicle carrying road, should be designed so that users of the lane are as safe as possible, i.e. the lane doesn't, through its design, lead to increased risks for the users of the lane. There are in fact a number of standards which are supposed to be followed when putting new cycle lanes in place. However, these are very rarely followed. So cycle lanes often place cyclists in more danger than if there were no cycle lanes there at all. Look at this site for some prime examples of poorly designed cycle lanes. There are some shocking and very amusing examples.

My own example of what I think is a poor cycle lane is in Milngavie just outside Glasgow. The following video shows some reasons why I think this lane is poorly designed and in some situations down right dangerous.

So there are a number of risks associated with poorly designed cycle lanes  which, if you don't have experience as a cyclist might not be obvious. That isn't even taking into account the fact that the lane surfaces  are often poor, debris often collect in them etc. But there is more to my reluctance to use lanes than the physical risks often associated with them. My biggest qualm with cycle lanes is the psychological effect that they have on other road users.

Psychological effect of cycle lanes!?! Your having a laugh!!!!!

Nope, and it isn't just psychobable. Let me explain....

I have noticed two effects that in my opinion can make lanes dangerous. The compartment effect and the negotiation effect.

In the UK we have a very structured road system. Everything belongs in its place, there are do's and don'ts in every situation you face on the road. Lanes are well defined on our roads and so long as you remain within your lane, you generally don't have to worry too much about what is happening in the other lanes. So long as the road users in the other lane aren't moving into mine.....

So we have a road like the one in my video, the cyclist is in his/her lane. Fantastic. They are in their place I don't need to worry about them. So long as I am in my lane when I pass, then we'll all be happy. And yet this leads to the following....

I move into the lane and the car stays within the main lane. Surely everyone is happy then?!?

As a result of comparmentalisation (a big word that!) the driver is happy to pass within centimetres of my handlebars. Fine for the driver, not so good for the cyclist. All it would take is a stone/pothole on the path, a gust of wind, or a door to open ahead, for that few centimetres to suddenly vanish with nasty consequences. Cyclists need wobble room, as we don't have a stable platform, suspension (OK we sometimes do), ABS, ESP etc. The space around a cyclist is our airbag.

So the psychological comfort that a driver derives from the existance of the cycle lane can in fact put the cyclist at risk.

The negotiation effect is an even bigger problem.

In the first video above there are sections where I almost feel forced into the cycle lane. Why do I feel forced? I feel forced because the presence of the cycle lane takes away my 'right' to negotiate with following drivers. As I approach the lane, drivers 'expect' that you will enter the lane. If you don't they feel their space is invaded. So by having the lane there, I loose my right to decide where on the road is safest for me to be, and I loose my ability to enter negotiation with the following driver with regards to my road position. In the video above this forces me into the door zone, a dangerous place where an opening car door can kill a cyclist.

As well as this, when I am in the lane and for some reason I need out, I need to negotiate a position further out on the road. However, my ability to negotiate is significantly weakened by the cycle lane, i.e. the following drivers expect you to stay in your lane.....why would you possible want out of your nice wee cycle lane!?

Surely all road design should aim to increase the likelyhood of successful negotiation between road users, not hinder it? When road users are aware of the needs and wishes of others, it makes the roads safer. When we are placed in compartments everyone gets caught out when road users need to leave their compartment.

So Mr Smartypants, what's your answer to all this then?

My answer is......there is no single answer. I can understand why new cyclists might see cycle lanes as a positive thing, but I can't help feeling, that they are divisive, and are part of the fuel for the us and them fire.

Am I asking that they be removed completely?

No. Obviously there are some roads where cycle lanes, which have been designed properly, really do help the cyclists and other road users. The problem is that the emphasis within local councils has been to create cycle lanes to tick boxes, so that when anyone asks, what have you done for cyclists? they can point at x miles of cycle lanes. Just a shame they are crap!

Instead look at every road separately, and if a cycle lane won't actually help, don't put one there! Perhaps signs indicating that cyclists may on occasion be further out in the lane due to parked cars junction etc would help. I don't have all of the answers but with a little thought, I'm sure the powers that be could come up with something better.

What is clear though, is that there are times when I and other cyclists, for reasons that aren't always obvious to non-cyclists, choose to stay out of the cycle lanes that are there just now. If you see us doing that, don't shout or abuse us, just pass us safely and think for a moment or two why the cyclist has chosen to do that.

I can almost guarantee, they don't do it with the intent of annoying drivers. I'd rather someone at the wheel of a potential 1 tonne weapon was my friend, and not my enemy.
Posted by magnatom at 13:33