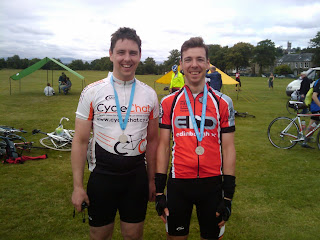 << (myself and HLaB from CycleChat) But blimey it was hard at times... Here's the story... I got into Stirling the night before to ensure I didn't need to get up too early. Arrived at the B&B and asked if I could put my bike into the garage as arranged. No problem. 'How will I get it out in the morning?' (They would still be in bed). 'Oh, it isn't locked. It's not a problem, I've never had my bike stolen' (£99 Halfords job)

Woke up in the morning and to my surprise the bike was still there.

Kick off was at 7:30 and I got into the second start group (about 30 riders). Started at a gentle enough pace, but it soon cranked up. I've never been in Peloton before and I seemed to get dragged into one that cranked up the speed. Wow, that was fun!

We were coasting along from Stirling to the Dukes Pass at between 18-25mph on the flats. Yee haa!

I was amazed at the difference that being in a group made. A huge one, and when I took the front (oh yes I did!) it was significantly harder. When behind other cyclists I found I could often freewheel and had to use the brakes a fair amount.

The peloton broke up at the pass, or should I say I lost it. It's a fair hill, not one i have done before, but not as bad as I had feared. I was glad to get it out the way as I was familiar with the next big hill (Crow Road) and so I thought the rest would be relatively easy. Oh no. Oh, and I missed the piper at the top.

Around Loch Katrine, was beautiful. Really, really beautiful scenery, If you haven't been there before, go there. Just be sure to avoid midge season. Today was midge season.

It was a bit like cycling through a starfield screensaver, except it was midges. Oh and you couldn't see them, but you could feel them striking your face. I had to stop at one point just to scratch my head.

The cycling around here also had some surprises in the shape of hills. Lots and lots of steep little energy sapping hills around every corner that don't seem to register on profiles! Following on from Dukes pass made them hard work, but it was a challenge after all!

Passing back through Aberfoyle on the way back a small crowd of magnatom fans.... sorry I mean race supporters had gathered and cheered us on. Much appreciated. I also picked up a cycle buddy for a while who helped pull me along which was great (and hard at the same time, as I felt obliged to help out every once in a while and he wasn't a slow coach!). I pulled into the lunch stop, he didn't. He is a proper cyclist. Respect!

Lunch was nice and it meant that I could check for texts and fix my tracker which appeared to have malfunctioned. Probably spent about 45 minutes here chatting, meeting folk from work who I didn't know were there!

Onward and forward. Along a long stretch of the A81. Now it began to hurt. I don't think the rest had done any good and my legs were like lead. The A81 was also not the most inspiring road to cycle on (and quite busy with cars). It was a long slog into a newly developed head wind. It hurt for quite a while. It was hard. I just kept gong. Along here a friend from cyclechat popped up behind me, all smiles. He told me he started about 50 minutes after me. It hurt a bit more. I remembered how he had a dodgy hamstring and would be cycling at 75%. It hurt a wee bit more. I waved him on and off he shot. I hit bottom and swore. Barsteward! (Not personal of course!).

I took some big gulps of my energy juice and after a while I got my second breeze. Things started picking up, which was good, especially with Crow Road on the horizon.

I joined some roads I knew well and I got back into a rhythm. In fact I found myself encouraging another cyclist who was going through a rough patch. I got to Crow Road and buckled down, knowing what was ahead. Luckily the rhythm remained. It was hard. It was 'I have about 70 miles already in my legs' hard, but my legs knew what to do. Keep going. All credit to them, they did!

I got to the car park - the false summit, which when you go past it reveals more big rises. Until today I have lost heart here and stopped. Not today. No way would it defeat me. And it didn't!

Just after the car park another cyclechatter appeared behind me. He had popped out to say hi (not doing the trossachs ton). He accompanied me up the rest of Crow Road (sorry for the language!) and down the other side. He kept up most of the way.

Then came the slog back to Stirling. With the big hill out the way it should be easy. Nope. Another one of those sections with short steep hills around every corner, and this went on all the way back to Stirling, about 15 miles. Now that section was HARD (and everyone said that at the end!). Not only that it had lots of loose stones which appeared on most of the downhills. Has any of the locals bought a lot of stone recently!

I didn't hit a low like before but it was HARD. Did I say it was hard? Yes it was hard. The legs were sore and tired and my neck hurt on the downhills. I wasn't sure which was worse, my legs going uphill, or my neck going downhill.

100 miles came and passed (on a hill) and no sign of Stirling! What! A trick (or was it to do with shortcuts or long routes, but that is another story!). How much further!? 2.51 miles to be precise! The finished approached (which was on grass?!?!) and I crossed it without falling off!

What hurt:
Legs - mainly hamstrings.
Neck towards the end.
Back before lunch stop, fine after that.
Numb fingers, but not a major problem. I am coping better with it.

I have lots of midge bites!

So all the talk is over. On Sunday I take on the Ton.

I'm sure I'll make it to the end (barring mechanical failure or heart attack!) but I'm not sure if I will take 6 hours (aye right) or 10. Someone could always run a book on my time! I'd be putting your money on the longer times

Many, many thanks to everyone who has sponsored me. At the time of writing this I have raised £540 for my mums hospice and £240 for Action Medical Research. Very impressive with some money still to come in (have you sponsored me yet?!).

To spice things up a little I will be using a GPS tracker to record my ride, and with a little bit of interwebby magic, you can follow me live below! From about 7:30am onwards on Sunday (21st June) you can follow my position and speed on the ton course. It starts from Stirling and ends in Stirling.

So feel free to leave comments here encouraging me to go faster, get to the end, to try and retake the lead from the snail that has gone past me etc.

P.S. The track point at time of writing is not at my house. Too many bus drivers/taxi drivers etc would be interested in that information....

So today was my last big training run (been off on holiday!). Took a difficult route (for me) over both Tak Ma Doon and Crow Road (I have discovered that the climb is much easier heading south over Crow Road!).

The contrast to last weeks run was huge! Beautiful sunshine, little wind, and my legs seemed to be supercharged! Managed to do the route with good average of 16.2mph with no stopping at the top of the hills (or on the way up!).

I also had a play with a live tracker application on my mobile which seemed to work really well, so for the big event I will have my mobile set up with an extra battery pack so that I can be tracked on my journey. So if you want to see my progress I'll be posting the link so that you can follow me live!

If you happen to live nearby you could also pop out and cheer me on (or boo at me if that takes you fancy!).

All I've got to hope for now is some kind weather and that Swine Flu doesn't pay a visit!

Wish me luck and remember to sponsor me if you haven't already!
Posted by magnatom at 22:29 1 comment:

Another training run today (tracked on my new HTC Magic mobile phone, cool phone!). I had intended taking in Tak Ma Doon and Crow road today. However, the weather, cold, wet and a strong easterly, put an end to that. That and the fact that I lost a full energy drink bottle half way through, meant I decided not to take on Crow Road.

However, not a bad training run as it will have worked my body!

The best bit was that I didn't stop at the top of Tak ma Doon, I just kept going. Progress!

The worst bit is that my bike fiddling (oo-er) hasn't solved my numb fingers problem. I am loathed to change too much leading up to the 100 mile ride, so I think I'll just have to cope with it.

Only 2 weeks till the ton. Yikes!

Remember and sponsor my pain...
Posted by magnatom at 10:10 2 comments: