I've been cycling on a Ridgeback Cyclone (2005) for 3 and a half years now. In that time it has served me well on my daily 10 miles of commute. It has not been a fair weather bike. It has cycled through sun, rain, heavy rain, unbelievably heavy rain, light rain, mizzle, wind, snow, ice, fog and rain.

In that time I have replaced the chain twice, cassette twice, the head set, the front chainrings and crank, the bottom bracket, front and rear wheels, front and rear tyres, a good number of brake pads, several cables, and the rear mech.

It has been through a lot.

However, it is heavy and not great for longer rides, especially where hills were involved! As well as this, my oldest boy (3 and a half) has learned to cycle. So it would be nice to have enough bikes for the family to go on rides, with my youngest (20 months) in a child carrier. So at last I had my excuse to buy a bike.

I wanted a road bike, capable of being used as a fair weather commuter, and a longer distance recreational rider. Something that would help me at least keep within a mile or two of the proper cyclists that I sometimes ride with from cyclechat.

So I took a day off work and set out looking for bikes in some of the Glasgow bike shops (the ones on cyclescheme).

Dales is a large bike shop in Glasgow and I went expecting good customer service and advice. I could not have been more wrong. The young lad who came to help me didn't have a blind clue about what he was talking about. In fact he tried to encourage me to buy a bike that he claimed would take full mudguards which it was blatently obvious to me wouldn't. They also wouldn't let me try any bikes as they were just too busy and I would need to book for another day. The shop was quiet. To me it just seemed that they weren't interested in selling me a bike, so I left vowing never to go back again.

Alpine Bikes faired much better. Again, I had a young assistant helping me, but he knew what he was talking about, listened to my needs and set up a bike for me to go for a test ride on. Very helpful and I would be happy to go back again in the future. The bike (a Trek 1.5 just wasn't right for me. My only gripe was their lack of stock.


Billy Bilsland's in the Saltmarket, was by far the best shop I visited. Don't be mislead by the current web site. Yes they do sell Raleigh bikes, they have to make ends meet. They also sell some excellent road bikes, Kinesis and Pinarellos. However, it's not the bikes they sell that make the difference it is the service and the knowledge of Neil, who currently runs the shop, that sets it apart. From the moment I entered the shop Neil asked all of the right questions and quickly understood what I was looking for. He spent a lot of time explaining what he could do for me, and what they offered, and was happy to chat about cycling in general as well. He soon set up a bike for me to have a ride of and was happy for me to take the bike for a good long ride.

It wasn't just the service that he offered for me, then and there that impressed me, it was the fact that if I bought a bike made up from one of his frames, he would offer lifetime free services (labour) and would always be willing for me to bring the bike back for a tweak here or there to get everything just right. After riding the bike (A Kinesis Racelight T) and hearing what he had to say, I was sold. I set about the business of deciding on exactly what form the bike would take.

I was lucky. He had some high range parts in that were going spare and he could do me a Racelight Tk with some Ultegra parts on (mixed with 105) for a good price. He'd make it up for me and let me test ride the next time I could make it in. Upon test riding it and taking advice from others on how good a bargain it was, I signed on the dotted line and got myself the bike. 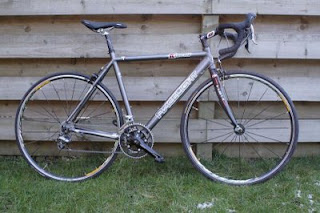 For those who care, and that might be no-one, it's a Racelight Tk with Ultegra shifters, rear mech, and cassette. The from mech is a 105. It has Mavic Aksium wheels, and an ITM Visia carbon fork. The cassette is a 11-23 and the front chainrings are 50-34. The cassette might be a little high geared from me, I need to do more riding to check.
I'm just about to add mudguards, bottle holder and possibly a computer.

It's a world of difference from my old hybrid and I might even try and keep it clean.

So in the future, expect to see me moving faster in my videos, at least when the weather is nice enough to take my new stead for a ride....
Posted by magnatom at 15:32 4 comments: