Today (Sunday 21st Feb) myself and other concerned people are meeting at the Bears Way cycle lane in a show of support for the lane and for the future plans, which include this exciting prospect at the Burnbrae roundabout. 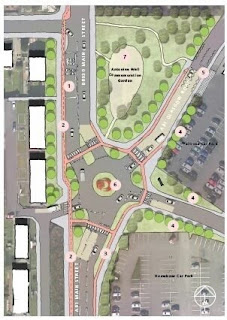 Some locals are though fighting it as you can see in this recent newspaper article. 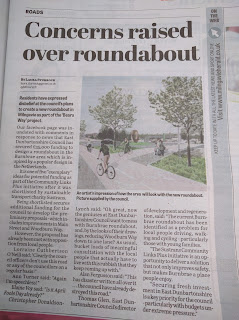 It's worse than that though. There is now a petition (which I won't link to) asking for the council to stop the whole project and take the lanes back to the utter mess they were to start with. This is the wording of the petition:

PHASE 2 OF THE BEARSWAY CYCLE LANE IS UNDER CONSULTATION AND WE HAVE BEEN TOLD THAT UNLESS THERE IS GENUINE REASONS OF OBJECTION IT WILL GO AHEAD.

SINCE PHASE 1 MILNGAVIE ROAD HAS BECOME EXTREMELY DANGEROUS, AND VERY CONGESTED. THE ROAD IS BADLY LIT AND DESPITE THE COUNCIL CLAIMS IT IS MADNESS TO TAKE AWAY ALL PROVISIONS OF SHOP AND COMMUTOR PARKING.

PHASE 2 WILL INCREASE CONGESTION AND CONTINUE DOWN TO KESSINGTON HALL MAKING IT A COMMUTER NIGHTMARE. PLEASE SIGN THIS TO SEE IF WE CAN PUT A STOP TO THE MADNESS.

Milngavie Road has not become extremely dangerous and it most definitely hasn't become congested. The only issues are if a bus stops at a bus stop, it is harder to overtake it. That's about the size of it. No lanes have been lost and if the above roundabout goes ahead, in the worst case scenario, only about 20m of dual lanes, will be lost.

Do these objectors really want more traffic driving through Milngavie?

If you feel that its time for change, if you feel that roads should be for people, and not just for people in cars, then join us today, at Hillfoot station at 1pm. Don't let a little rain put you off!!

Posted by magnatom at 10:16 No comments: