BearsWay: A Tale of Two Gentlemen

The Bear Way phase 1 wasn't perfect. Yes, I've said it. In fact I have previously gone into quite a bit of detail about its shortcomings. Of particular note are the entrances and exits which are badly designed  and the fact that the lane swaps sides of the road part way through.
Yes, mistakes were definitely made. It isn't perfect and I pointed that out. In fact I pointed it out in pretty strong terms. I have though since had plenty of opportunity to use it and watch it being used, and if I'm honest, it is far, far superior to what was there before. I regularly see kids riding on it, and I NEVER EVER saw kids riding along that road before. I was harsh when I initially reviewed it, and in hindsight, I was probably too harsh.

Perfect? No. A big step in the right direction towards more people friendly streets? Yes!

Still, some of their concerns are correct. Two lanes on one side of the road isn't perfect. I've not had many issues myself, but yes, some may have. Tweeks at the junctions could resolve all of these issues. The narrowing of the road has reduced the speed of traffic (I fail to see how this is a bad thing, but hey...). Some of the junctions are a little harder to get out of (although the main reason they are hard to get out of, seems to have been overlooked.....the huge amount of traffic!). The road is constantly congested beyond belief......Umm, actually, it isn't. A chap driving up and down the road 150 times has published data showing that on average you are held up 1.3 seconds because of the lane. Scary.

But, let me be quite frank here. I'm going to be as honest about the possible outcome of phase 2 and beyond. There is a possibility, as mad, dangerous and utterly infuriating as it may sound, but if the next phases are designed properly.......

Drivers and their cars may take slightly longer to drive this section of road.

There. I said it.

In fact a very wise man once said some very wise words on the subject:

It is recognised that achieving these targets will require a combination of "pull" and "push". On the pull side is the need to offer an enhanced public transport system with faster, more direct, more frequent and more comfortable services. Cycling will also be encouraged with an enhanced, extensive, safe network of routes with lighting and secure parking. The push will come from the use of parking restraints, a land-use policy designed to minimise demand for vehicle movement and the introduction of a requirement for firms to develop workplace transport plans which reduce dependence on car commuting.


If we really want a better environment, reduced traffic, less pollution, better health, etc, we need to accept a little inconvenience.  Spot on. In fact this wise gentleman goes on to say:

Individuals may have to accept restrictions on what they may presently perceive as their freedom to choose where, when and how to travel. Politicians and professional officers at both national and local government level will have to make difficult decisions regarding their attitude to transport and be prepared to promote and enforce restraints on the demand for movement.


I'd say this actually goes a little beyond what I'd want. Though I think he is suggesting that movement using the car might need to be restricted and that would help drive demand of more sustainable options (whilst understanding that not everyone can use those alternatives).

Importantly he points out that the decision to do this is most likely to be difficult politically, and that those who will drive these schemes forward will find the going tough. Spot on again my friend, as we are finding out with BearsWay and over in Edinburgh with Roseburn Cycle Route.

If only the residents of Bearsden and Milngavie would take head of this gentleman's words. Unfortunately even local retired roads experts don't heed these words, as is demonstrated in this letter. 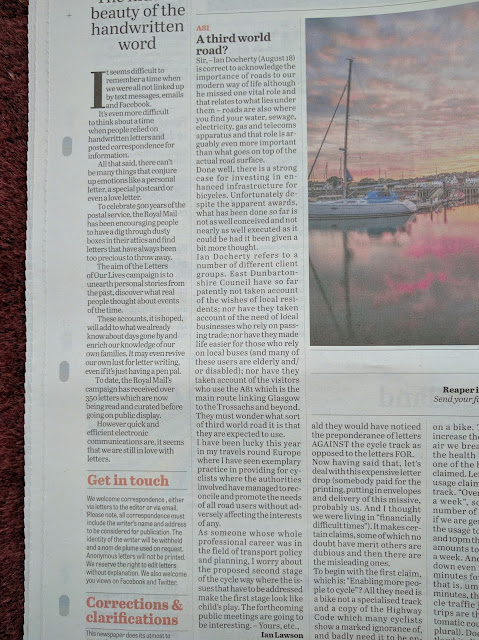 Just in case you can't read the letter in the picture, here is the relevant section:

I have been lucky this year in my travels around Europe where I have seen exemplary practice in providing for cyclists where the authorities involved have managed to reconcile and promote the needs of all road users without adversely affecting the interests of any.


So this gentleman who, by his own words has spent his whole professional career in the field of transport policy and planning, thinks that the needs of all road users can be met without adversely affecting the interests of others. This is, as I am sure you can work out for yourselves, totally at odds with the comments of the first gentleman I quoted. It is also actually at odds with what happens in European cities where cycling is a major mode of transport. In Amsterdam for instance, many parking spaces have been lost!  The first gentleman  suggests that we need, 'push' and 'pull', if we are to (and this is a quote again from the first gentleman), 'to progress towards a user friendly transport environment'. At POP we talk about a people friendly environment, but I think the sentiment is the same.

Is it possible then to reconcile these two gentlemen's opinions. What differs between them, and can we bridge the gap?

Yes, 23 years, is exactly what differs between these two gentlemen, or should I say this gentleman. You may have twigged already, but the chap writing the first piece (back in 1993) is in fact the same chap who wrote the above letter to the local newspaper. You can find his original article here and read from page 10.

So what really has changed? I think that this chap was almost ahead of his time in 1993 writing as he did. He could see that increasing car ownership and use was not sustainable, and that change was required, and part of that change required investment in active travel. He could see that the change that was required, wouldn't be easy. It would be politically difficult. Now though, in his 2016 letter, rather than writing about it from a dispassionate distance, he is very much affected by the proposed changes personally, and he is doing what most of us do in that situation, fighting against the introduction of perceived difficulties that may directly affect him. He is fighting against the politically difficult decisions which he himself suggested were required.

In the short term, BearsWay will indeed cause local disruption. It might take a lane away here, and narrow a lane there. The road will not be as 'gloriously wide' as it once was (yes, I've heard people say that). It may take you a bit longer to get to Asda, or to pop to the golf club, or pick the kids up from school. But, for the sake of leaving the house a couple of minutes earlier, imagine what you could gain....

Kids, getting much needed exercise on the way to school (when the lane is fully finished my kids could use it to get to their High School)..... 10% or even possibly more of the cars on the road, vanishing, as more people (who are able) deciding to take the bike to work and not the car...... As a result, lower traffic volumes, and thus and nicer environment to live in.... Lower levels of pollution (see section 4.2.7 in this report).... Lower traffic speeds, and thus fewer serious crashes and injuries.... Better population health.... More business footfall (yes cycling does bring more local business, to local businesses!).

Medium to long term, its very likely that theinitia  disruption would fade away. Eventually as cycling numbers increase negative effects on motor traffic would be offset by the shift in use away from the motor car.

Well that's pretty much what has said everywhere where this type of infrastructure has gone in, and amazingly it has always made a difference. Build it, and importantly, properly connect it, and they do come!

We are now sat at a crossroads, On Thursday this week (1st) and Wednesday next week (7th) there will be public meetings in the evening in Milngavie. The gentleman above will almost certainly be there. The chap who told me kids should cycle on the back roads will be there. The lady who really doesn't want the road narrowed will be there. Will you be there?

Yes, it almost certainly will be horrible, It is likely to be full of emotion, prejudice and exaggeration. All the more reason why we need to be there to support something that, if it goes ahead, could be an asset for generations to come. We have been battling for segregated cycle infrastructure for years, now that we are tantalisingly close to getting something decent, we mustn't let it be watered down by NIMBYism.