Some would say I have the face for radio. My wife wouldn't, but then she is a tad biased.

Do I have the voice for radio though?

Going by my occasional high pitched squeals in my youtube videos, perhaps not. Mind you I have had the odd comment about 'wrapping my voice up and taking it home', from my lady viewers, I think!. So I thought it was about time you all heard my voice properly, in normal conversation, under low stress conditions.

Hmmm, Taking part in a 5 Live radio discussion on the Livesey show which, after I had agreed to take part, I was informed was titled 'The War Between Cyclists and Drivers' with self styled petrolhead Steve Berry is low stress isn't it!?! Oh, and add to that I was phoning in from Boston, which I was trying to get home from at the time, having been snowed in for two days.

Never mind. It was sure to be a balanced discussion, in which Steve was definitely not the type to go for silly point scoring sounbites like, 'registration plates for cyclists' so what could possible go wrong.....

A cycling friend recorded the show here.(He forgot his laughter and comments were being recorded as well!)

Still I now have a major claim to fame. No not appearing on the Livesey show. Pah! No my claim  to fame is that one of my comments was used in a trailer for the show (mp3 here). How cool is that!

Posted by magnatom at 20:49 No comments:

It's been a while since I've had an incident to post. It's been great on the roads. However, normal service has resumed today when I encountered this road user*.

It has some extra footage at the start and end on purpose. At the start to show that I do sometimes use the lanes. I used it there as I was slowed up due to the headwind and the preceding hill. As soon as I speed up again I get out. It has a number of nice 'features' that I aim to avoid.

I show the end as it demonstrates that the lane is due to end soon, by taking you straight into the back of parked cars (only one there today which was unusual).

*I've decided not to refer to drivers, cyclists etc any more. It's good v's bad, not cyclist v's driver......
Posted by magnatom at 15:13 No comments:

Just last week my old Busch and Muller Ixon IQ light died a death. I've not had much luck with the Ixon IQ, this being my second IQ. On both, the clips holding the battery compartment failed, and eventually they just stopped working. I know others that have better experiences than me with this light, but the light gods have not been smiling on me.

So I've bought a new light. A Philips Safe Ride LED light (see here for a translated German page on the light)

I must admit I would never normally consider a bike light designed by Philips, they don't have a great reputation for quality bike lights, certainly not that I know of. However, having read some of the chat about it on the CandlePowerForums, I decided to take a leap. It is available in the UK from Amazon (see below).

My old B&M Ixon IQ was rated to run at 40 Lux when on high beam, the Philips light is rated to run at 80 lux, and according to the the CandlePower forum, has an excellent beam shape and provides excellent light on the road. This is important to me as about 1/3 of my commute is on unlit rural roads.

What I was also keen on was that it had a 'city' mode where you could run the light at 20 lux, preserving the battery (which can apparently run for 2 hours on high), and it has a beam shape designed not to dazzle other road users.

So yesterday was my first use. My commute home was not completely dark, but even with some failing light remaining, I was impressed with the light on the road and the peripheral light. It lights the ground from about 50cm in front of the bike to a fair distance away (50-60m). However, I still need to see what it can do when it is darker. I'll be cycling home on Friday later, so it will be pretty dark, so I'll update this blog then to let you know how I get on.

So far, it looks like a damn fine light (very sturdy) and one that you should definitely consider.

So last Friday I tried the light out properly for the first time. I have to say I was very impressed. Until now I ran with the Ixon IQ alongside a Hope 1 LED. The hope 1 LED always outshone the Ixon IQ. Now it is the turn of the Philips light to outshine the Hope 1!

The beam shape was excellent not only lighting up the road for about 60m ahead, but also providing ample lighting to see each side of the back lanes roads. I like to be able to see the sides, I don't like cycling down a tunnel!
There were some minor niggles; the top lip of the light radiates light towards the cyclist, thus eliminating some night vision. Some tape on there would sort that out. The battery bar was a bit bright and it too could do with a little masking. I also haven't had great battery life yet, but the batteries are new, so that is likely  to improve. If charging from scratch via USB (on your PC) it takes 17 hours to fully charge!!! Of course, it is quicker with the supplied charger.

At the moment, would I recommend this light. A definite yes, especially if you are looking for a bright light that runs off AA batteries. No rattles, no difficultly using the light and no problem seeing where you are going. Lets see how it fairs over a year of commuting.....

Feel free to ask me any questions!

So I've had the light for nearly a year now. How am I getting on with it?

To be honest I am very happy with it. It looks just the same as it did when I bought it, it works just the same as when I bought it and it does the job I bought it for! As I've mentioned above my commute is split between urban lit roads, and dark country lanes. The light works perfectly on both. On low mode it is more than bright enough to be used in the urban jungle. I use it along side a hope 1, so I use the hope to flash at the same time. The big advantage of this light is the cut off it has. It is bright, but it doesn't dazzle oncoming drivers.

On the dark lanes I use high mode. This far outshines the Hope 1 at it's brightest setting. It provides plenty of light where you need it, on the road and a nice amount of light to the sides, which is useful on the lanes. Can you get brighter cheaper lights? You probably can, although I suspect they wouldn't be as well built, or provide the dazzle cut off that the Philips light provides.

My only niggle with the light is that the USB charge via a computer takes quite a while! I tend to take the batteries out at work. It is much quicker with the supplied charger.

So if you are looking for a good light (that will give you high beam for 70 minutes) that won't dazzle drivers but can provide plenty of light on dark lanes, then I highly recommend the Philips light. It is also cheaper now, with Amazon selling it for just under £90 (see link above).
Posted by magnatom at 10:08 6 comments:

So I've decided to add some adverts to my blog. Why would you do such a thing!!!! I hear you cry!

2) I want to update my cameras!

Yes My current camera is a bit temperamental, I'm worried it would conk out on me and I have seen a few folk with rear cameras, and I can see the utility in that. So, I've added some ads to see if I can get a few pennies to go towards new cameras.

So they will be appearing soon.

Posted by magnatom at 16:47 No comments:

Publicity is always good, or so they say, and there is some good that comes from this. There will be more awareness that some cyclists have cameras and perhaps a few folk on the road will improve their driving around cyclists for fear of being filmed.

However, both of these reports suggest that there is a 'WAR' going on, a war between cyclists and car drivers.

Let me state this clearly.

There is no war between cyclists and drivers.

Let me explain. I cycle 5 days a week, about 24 miles a day about 45 weeks a year. That's a lot of milage and time on the roads. During that time I interact with lots and lots of cars, HGVs, buses, cyclists, etc. Sometimes they overtake me, sometimes I overtake them. Sometimes they have to wait behind me for a few seconds, sometimes cars hold me up a little etc.

Now remember, we are apparently at war. What constitutes a war on the roads then? 80% of the time the passes are too close, there is aggression, I am ignored etc? Yes that would probably constitute a war.

Oh, wait a minute. That's not quite how it is out there. At most (and it is probably a lot less than this) on 3% of my commutes, I have a notable problem. That is, one bad pass, one piece of a abuse etc. During that commute that one bad incident is balanced by perhaps hundreds of good interactions. Being very conservative perhaps I interact with 100 cars per commute each way, so 200 in total per day.

So 0.015% not 80% of my interactions with drivers is poor. Does that constitute war between cars drivers and cyclists?

Of course not. But it doesn't make for a good headline either.

In truth, there are some bad road users out there, some are drivers, some are cyclists. There aren't many, but bad apples always stink out the bag.

So how do we keep the newspapers happy? I'm not sure they would go for:

Perhaps if we give them the war they so sorely seek.......

Posted by magnatom at 11:37 No comments: 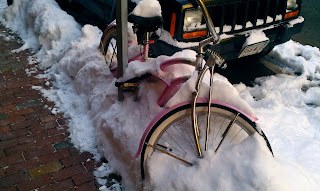 It's been a quiet couple of months for me. I've either had to take the car, due to the snow, been away on courses, or been struck down with a multitude of bugs (the joys of having three young kids in the house!)


Even when I've been on the road I haven't had much in the way of incident, which has been great. Why is that? Who knows, but I've noticed over the years that quiet periods come and go. Here's hoping that the current quiet period continues for as long as possible.

Mind you, with significant road works on my route to work for the next couple of weeks, and the school half term break coming to an end on Thursday, I suspect that I may have some video material shortly......hopefully of the 'look at me filtering past hundreds of cars' type!

Posted by magnatom at 13:41 No comments: