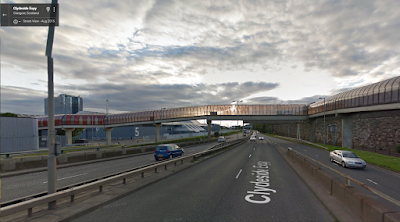 Its the week leading up to Pedal on Parliament. Its always a busy week with e-mails flying back and forth between the organisers. At about 10:55pm on the 20th April, whilst I wasn't sending any e-mails, I was keeping an eye on them on my smart-phone whilst doing the ironing. That's pretty standard for me at that time of night on a 'school night'. In fact at this precise moment in time I was having a Twitter conversation with Ross Greer and making my mind up about voting Green in the Scottish elections.

I hear a noise, definitely an unusual noise. I look into the hall and I see one of the cats mulling about. I look around for a moment and then assume it was just the cat knocking into something. I carry on as before.

The next morning I get up, and head downstairs. I open the curtains and, in passing, notice a mark on the front window. It looks like bird poop, so I think nothing of it. I get ready to go to work and off I go.

Later in the afternoon I get a text from my wife.

When you get a chance can you look at the CCTV for today. Not sure if someone has tried to throw a brick at our front window.


She'd spotted the marks on the window, and had taken a closer look. She also noticed a large rock in the garden.

I get home and look, and sure enough, there is a mark on the window, that exactly matches the marks on the rock lying in our garden. I quickly fire up the computer and log in to our CCTV system. There it was. At 22:55 pm I see someone running into our garden and throwing a brick at the window, before scarpering off.

Horrible, but fortunately no lasting serious done, apart from a few permanent scratches on the window...Double glazing is difficult to break apparently. Thankfully.

I called the police. When they came and looked at the footage, they agreed that it looked targeted. The suspect clearly hid his face as he ran into the garden. He targeted us, despite us having CCTV cameras.

Anyway a few days passed, as did a successful #POP2016, and life was heading back to normal (it takes a few days after each POP for that to happen!).

Then on the 25th April at about 10:20pm, when I was in the kitchen doing pretty much the same thing as I was on the 20th.....I hear a strange crunching sound. This time I head straight for the front window. As soon as I look out I can see strange reflections of light from the ground next to the back of our car. It looked very much like glass. I rush outside to see that the rear window of our car had been smashed and a large rock was sat inside our car.

Once again CCTV caught the act.

Here is the CCTV footage from the two incidents.


The police were called again. Once again they agreed, that this was targeted and that it was likely something to do with my cycle campaigning. They went around the neighbours, no-one saw anything unfortunately. After some further discussions they suggested that I could share the footage. So I have.

The last 10 (almost 11) years have certainly been interesting. All, because I took up cycling and, goodness me.... I dared to stand up for myself and not accept that things just happen. I'm not alone in doing this, I'm just particularly well known for doing this.

I am not anonymous and it is unfortunately very easy to find my address online. There's nothing I can do about that.

So, someone has decided to take direct action. Well, I say direct, by that I mean against my property and not me personally. They have thrown a couple of large stones. Perhaps they were also behind the tacks that were left at the end of my path previously.

What they expect to gain from this? I don't know.

What's pretty clear is that this is aimed at me and is 99% certain to be something to do with my cycling, helmet camera use or campaigning. I don't do anything else controversial and neither does the rest of my family!

So if anyone out there knows what this is about, please let me know. You can leave a message below (anonymously if you prefer). If you know who is doing this, either let me know or the police know via 101. Do you recognise the clothes the stone thrower (looks like slight to medium build) is wearing?

From the videos it can be deduced that the person (persons) is/are wearing:

Video 1: a cap, a puffer jacket with what looks like lighter patches on the shoulders, pale coloured shorts, a darker zip top under the puffer, possibly a watch or a strap on their left hand, and some trainers with distinctive bands on them as you can see in the video (anyone know the make?)

Video 2: Same build, cap which has a slightly darker visor (possibly the same cap as before), and possibly a motif on the front...otherwise difficult to see.

Were you in Torrance on either of these nights and did you see anything suspicious? Have you seen anyone boast about doing something like this online? Or have you heard anything about it in the pub?

Anything you can do to help would be appreciated.