As I'm sure many of you will know, it's been bike week. What is bike week? Well have a look here. Effectively it's a celebration about everything bike, and a vehicle (oh and unintentional pun there) to getting more people out on their bikes.

Yes, I do harp on about infrastructure and investment being the way to mass cycling, and that education and advertising not being the answer, but I do actually like the idea of bike week. It helps continue the drip, drip, drip of positive information that will perhaps help to change people's (and by people the important people here, are politicians) minds and attitudes towards cycling.

Most importantly, Pedal on Parliament is listed as a Bike Week event (you don't actually have to happen in bike week!) and through them we get indemnity insurance. So yeah for Bike Week!

Truth be told, not much actually happens up our way for the actual bike week. A few Dr Bike sessions, the odd bike breakfast and a few other bits and bobs, but nothing major.

This year though I got an e-mail from my employers (NHS Greater Glasgow and Clyde). As part of bike week they wanted cyclists who work for them, to share their stories of cycling to and from work. The best entry, be it 'good, bad, witty or earnest', would win a prize: a bike package up to the value of £500.  You could enter this either via e-mail or via Twitter using the hashtag #nhsggccycling. Now, being a bit of a Twitter guy (though not during work as the NHS does not let you use it during work, which is sort of a mixed message as they are asking you to tweet pictures....)...I decided to share my story.

I'm not going to share it all here, you can pop along to Twitter and search for #nhsggccycling if you are interested, but here are a few that were representative of my week.

A @RoyalMail driver on his mobile phone whilst driving in Milngavie. On my way home. (Reg WR10BFJ) #nhsggccycling pic.twitter.com/zkRMs1WTHm
— David Brennan (@magnatom) June 15, 2015

Why no physical reminder for drivers that cyclists have priority here? (On my way to SGH) #nhsggccycling pic.twitter.com/mMVNEAkssK
— David Brennan (@magnatom) June 15, 2015

This is what an overtake should look like. Well done to the @EDCouncil driver! #nhsggccycling pic.twitter.com/cYEyksE9BB
— David Brennan (@magnatom) June 17, 2015

It was though, a picture from today really summed everything up with regards to cycling in Glasgow, perfectly for me.....Let me explain.....

Earlier in the week I noticed that the cycle lane leaving the Clyde Tunnel had been completely blocked by building work for the Fastlink development. Those who read this blog will know I've talked about this white elephant before (here and here and here). It's a disaster for many parts of Glasgow. Creating segregated routes for buses, who really need them for their safety (ahem), so that they can get between the city centre and the SGH a little bit quicker. Many of these new segregated lanes exclude cyclists, so we are left to mix with the the traffic on the now narrower roads. Yes, they have are supposed to be putting in alternative routes for cyclists, but they are quite frankly..... a pile of steaming turd.Yes, that is the technical term.

I know no-one, not one person, who likes Fastlink.

Anyway, it is running way, way behind schedule (and almost certainly over budget) as it was supposed to be finished by now, but it is far from finished. Linthouse is currently a building site. All around there is new concrete being poured, and disturbingly, pedestrian barriers are being put up left, right and centre. In Glasgow the bus (and no, not an electric or hybrid bus, just your standard 'cough, cough' diesels) reigns supreme. I feel so sorry for the residents of the areas this is travelling through. Not only is the construction causing disruption, it is going to leave the areas they live in much less people friendly. It's very sad for the area.

Anyway, back to the main point of my story...

So earlier in the week I noticed the lane was blocked. You could get around it on the path, by bumping up and down a few kerbs and taking a few sharp turns. I mumbled a bit and one of the builders heard me. I just mentioned in passing that had they been doing work on the road, a proper diversion would be in place. They wouldn't just shut off a road. He mumbled back at me.

Here's a tweet someone else made about the same issue.


#nhsggccycling Here's the scene at #ClydeTunnel exit this am... Lots of thought put into the alternative routes pic.twitter.com/L0PgHor86X
— Andrew Winter (@TeoWinterAndy) June 16, 2015


So, today, I cycle out the tunnel and I see that I have been given a response. A response that pretty much sums up Glasgow City Council and its attitude to cycling. Yes the council that claims to have 305km of cycle infrastructure, when the truth is very much far from that. You couldn't miss the response. I'm not sure it could have been any bigger... 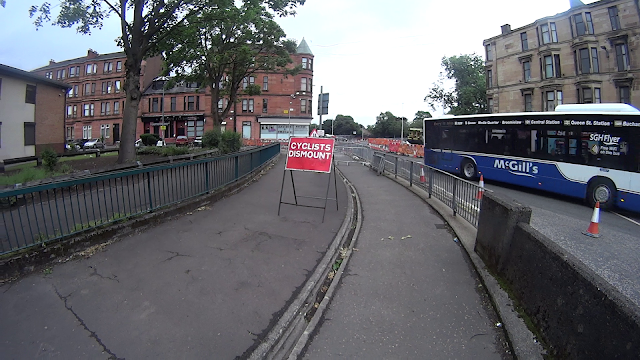 So that's that then. Glasgow City Council's take home message for Bike Week and for anyone cycling to the spanking New Southern General Hospital, a hospital that now employs 10,000 staff, is:


You're just a bloody cyclist, get off and walk.
CYCLISTS DISMOUNT!

Whilst I think this is the perfect photo that represents cycling in Glasgow, I strongly suspect that NHSGGC will not be giving me a £500 prize.....
Posted by magnatom at 17:19