Anyone who commutes through certain parts of Glasgow (Along Pacific Drive for instance) just now will be acutely aware of the ongoing road works. Glasgow is in the process of undergoing a transport transformation. It's not on the same scale as the Edinburgh tram works, thank goodness, but there is a small revolution in public transport taking place.

What is Fastlink? Umm, errr, that's actually a pretty good question. It's sort of a new bus route thingy. Sort of. The confusion is a result of the fact that it started off as a guided busway/tram type thing which was quite extensive, but it has been downgraded to a partially segregated bus route that has only one route. It will be going between the city centre and the New Southern General Hospital which is currently being built. Turns out, I can see it being built from my work, just about 30m from where I sit.

The NSGH itself is controversial. It is being built to replace two other hospitals in the city that were both more central. The NSGH is however, a bit out in the sticks on the south west side of the city. Many people thought it was daft to build there. However, that decision has been made and the hospital is taking shape. So, good decision or not, we have to live with it.

One of the downsides of the NSGH site is that it doesn't have great transport links. You're not too bad for public transport if you are coming from the west or east, but not so great from the north and south. That was part of the reason I started commuting there by bike. Driving, especially from the north can be troublesome. Part of the reason for this heavy traffic is people commuting to the current SGH. With the larger NSGH, this will only get worse.

So....to try and keep everyone happy, transport links had to be improved. Thus, a new scheme to get people in from the east was planned.....eh? The east? Not the north and south? Yeessss.....Anyway, Fastlink was born. Actually, that might not have been the original reason, but with the reduction of the plan to just the one route, that is affectively what it it has become. A transport link to the city centre for the NSGH.

Now's a good time to watch this video.

This is just the first phase in the development of a bus priority network which will be rolled out across Glasgow as funding becomes available.....

Public transport is good. In fact I am incredibly pleased that Glasgow City Council are at last looking at prioritising something else other than, the car. This is especially pleasing considering only about 50% of Glasgow households have access to a car.

You knew that was coming....

Of course, one could argue that whoever did the graphics was just being a bit lazy that day. Bikes might be harder to render than cars or buses, and perhaps they just forgot to add in the bike infrastructure.

Unfortunately i think it's more sinister than that.

The reason that there is no bike infrastructure is very simply down to the fact that, at the time that the plans for the segregated bus route was devised, and the time that this video was produced, there were no plans for the cycle routes. Yes, dear reader, shock, horror, cycling was added on later.

A bolt on. An afterthought. I challenge Glasgow City Council to prove that assertion is wrong.

I am not a traffic engineer or planner, so please correct me if I am wrong again....but isn't it a good idea to plan something as a whole, and not plan some bits first and then add on the rest later as a bolt on?

It gets worse though as I have just had the pleasure of looking at the plans that have now been developed for cycling around the Fastlink scheme. They are not public yet, so I got a glimpse of them through someone who knows someone, but going by the fact that Glasgow CC seems intent of pushing through the Fastlink plans with the minimum of consultation.....


ASIDE: The Squinty Bridge also known as the Clyde Arc and the Finneston Bridge has two way bus/taxi/cycle lanes on it currently......I say currently, but work is underway to change the infrastructure on the bridge. Fastlink will be taking over and cyclists will not be allowed to use the Fastlink lanes. We will have to use the road with other traffic, or the new indirect and pedestrian shared routes (see below). Remember the work is underway, but the consultation for the Traffic Regulation Order that would allow the bridge to be used the way it is being rebuilt (right now) is open until 24th January. What would happen then if the objections were upheld......? Feel free to write to Brian.hubbert@glasgow.gov.uk if you object.

....Unfortunately the plans are only on paper, but I managed to get some photos. So here they are, going from East to West. 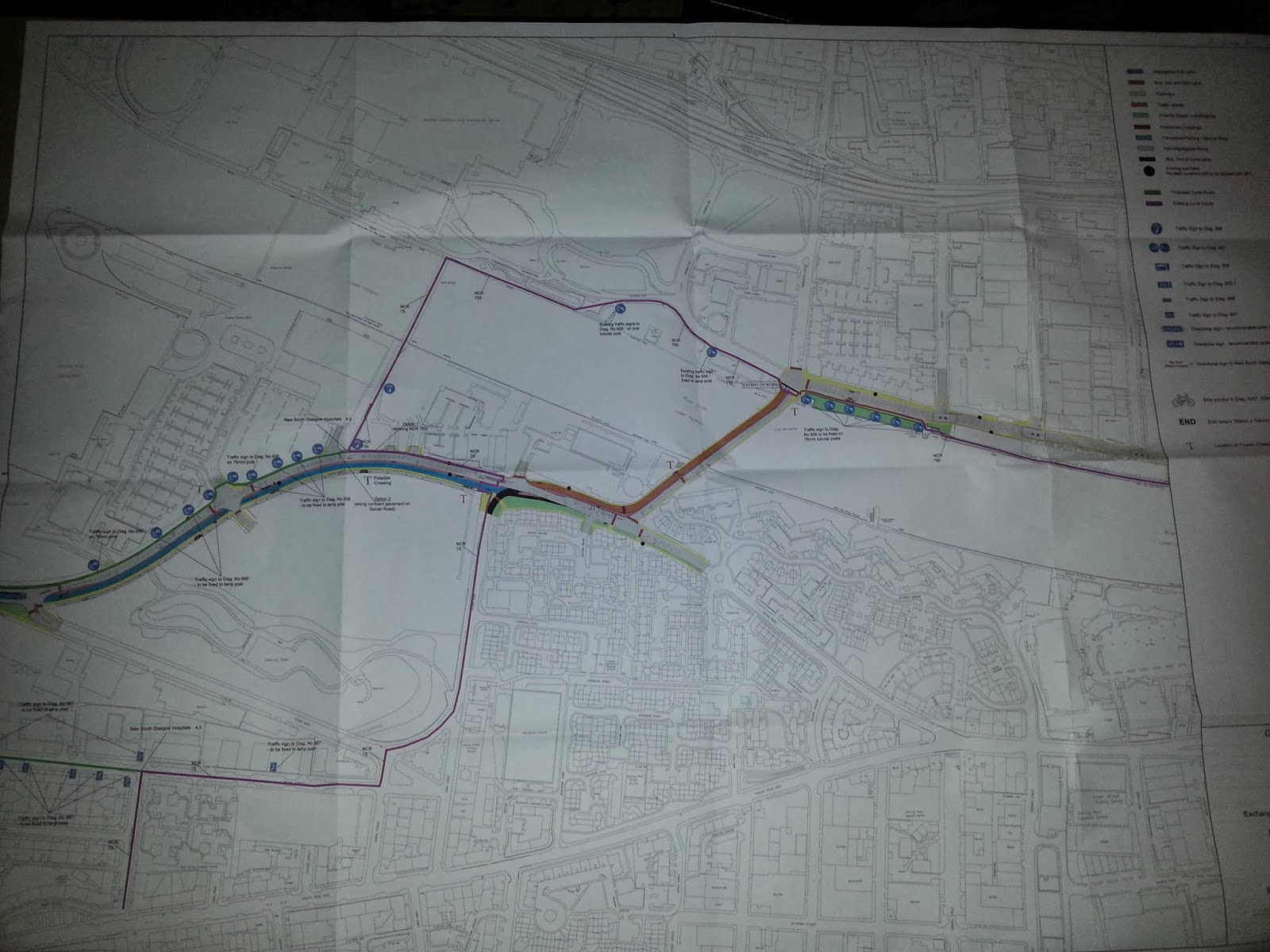 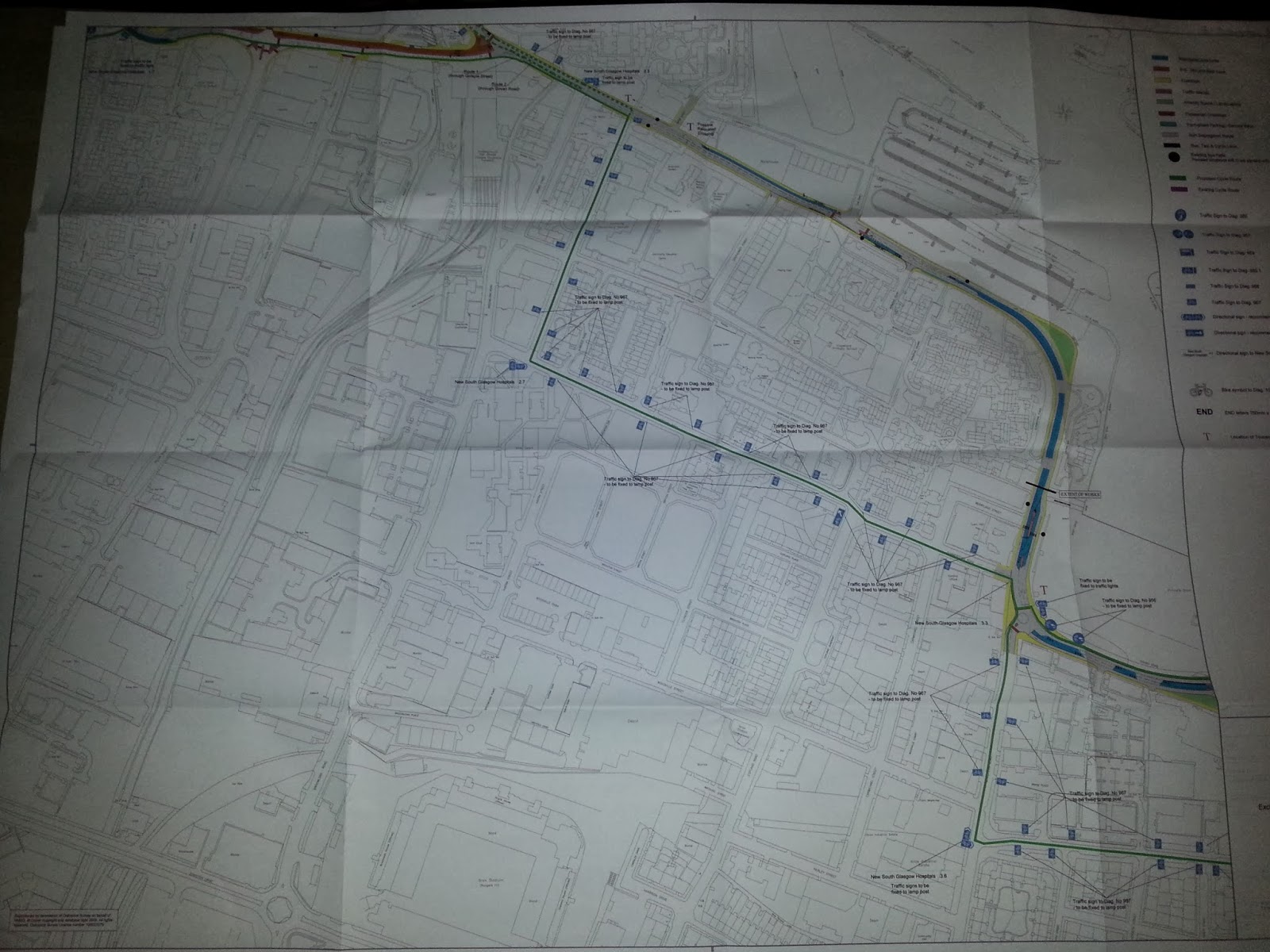 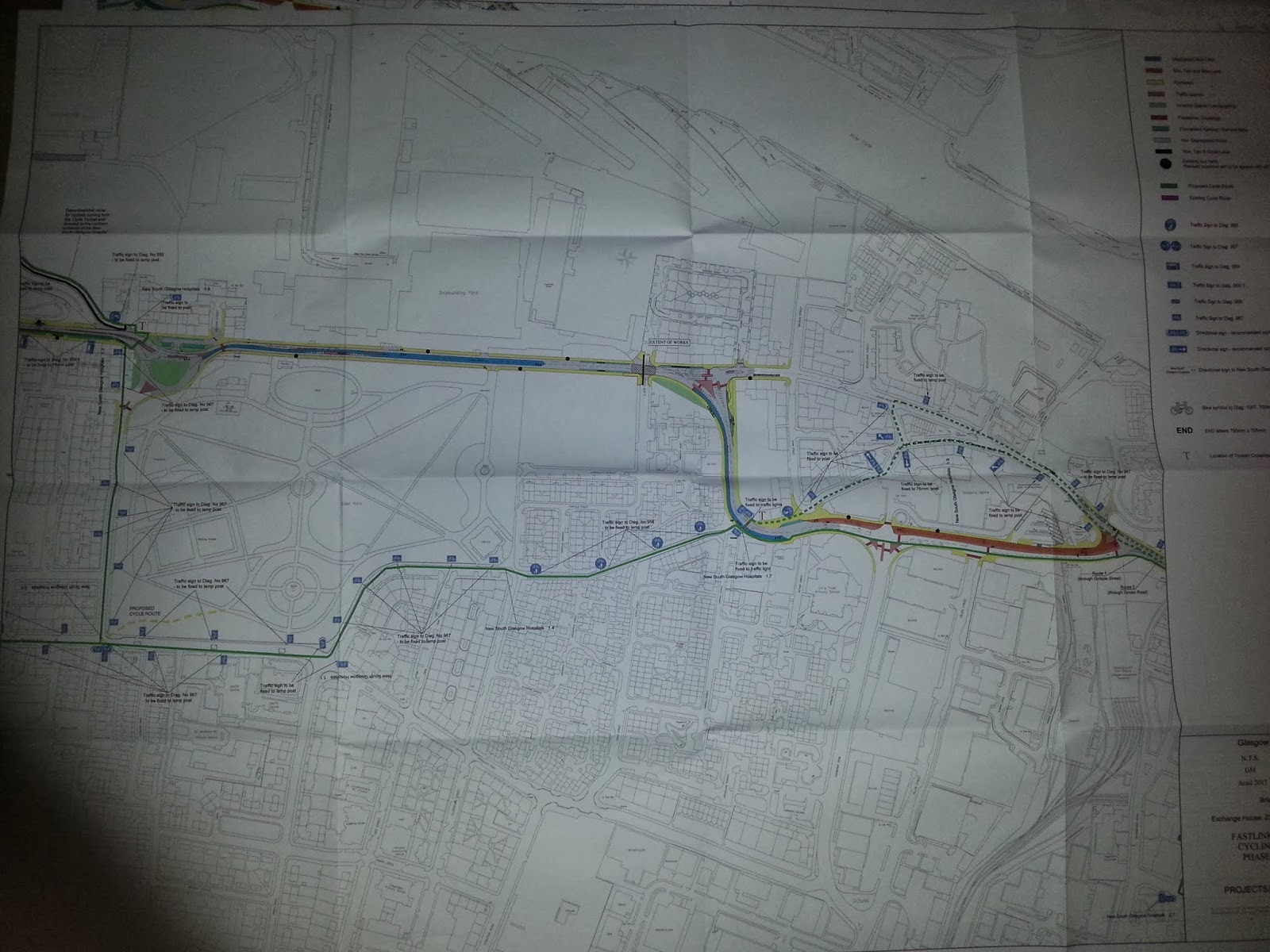 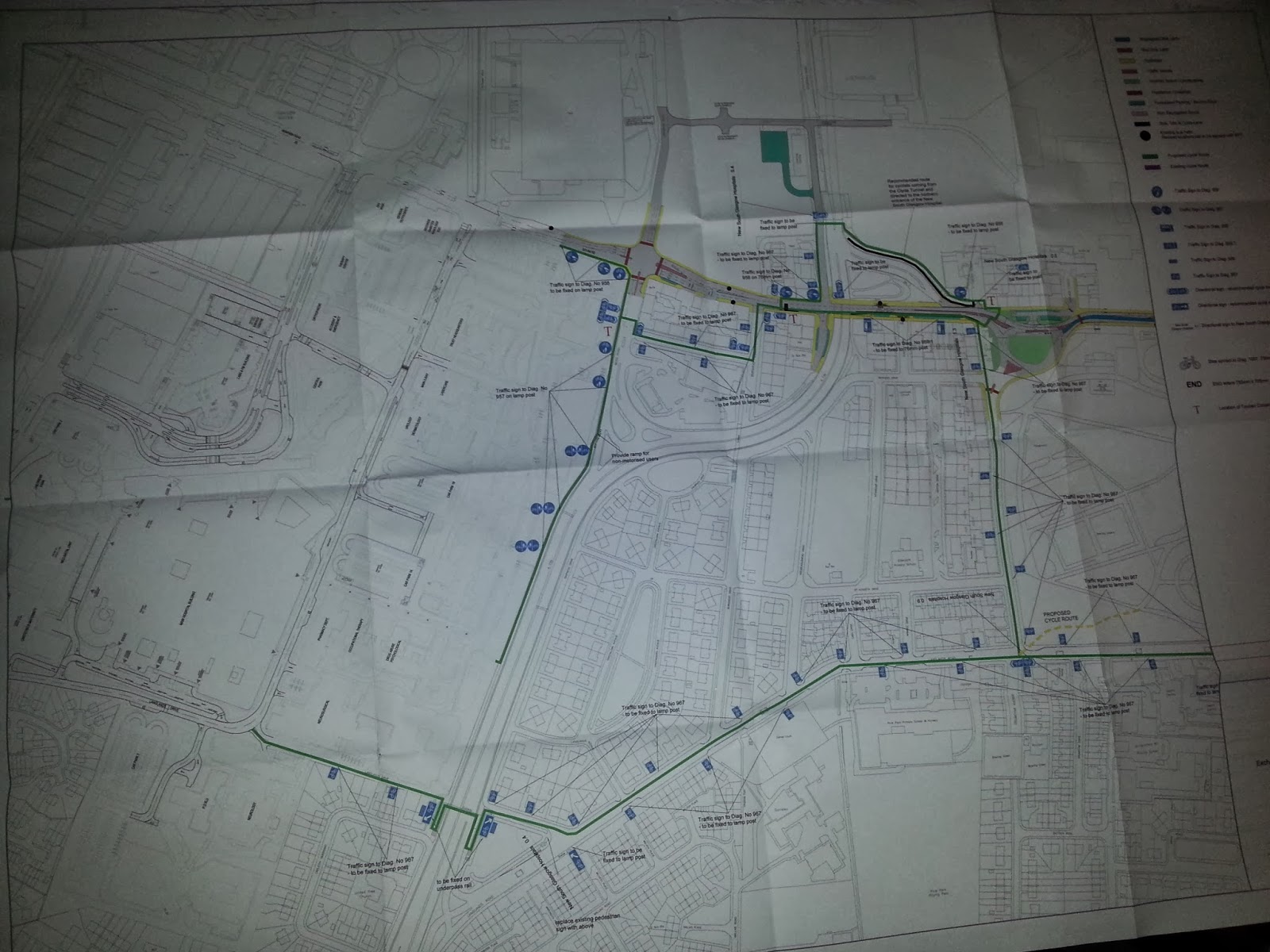 Ah yes, they were rather big maps and you won't be able to see much even when you click them. You can see the originals here, here, here, here and here.

I'm not going to say much more just now. I'm going to let you have a look at the plans yourself. Feel free to ask questions, make comments, praise them, or trash them. I'll talk a bit more about what I think are the big issues later. I will leave you with one detail of the plans which isn't actually cycling specific, but which I think is hilarious. Have a look at this.... 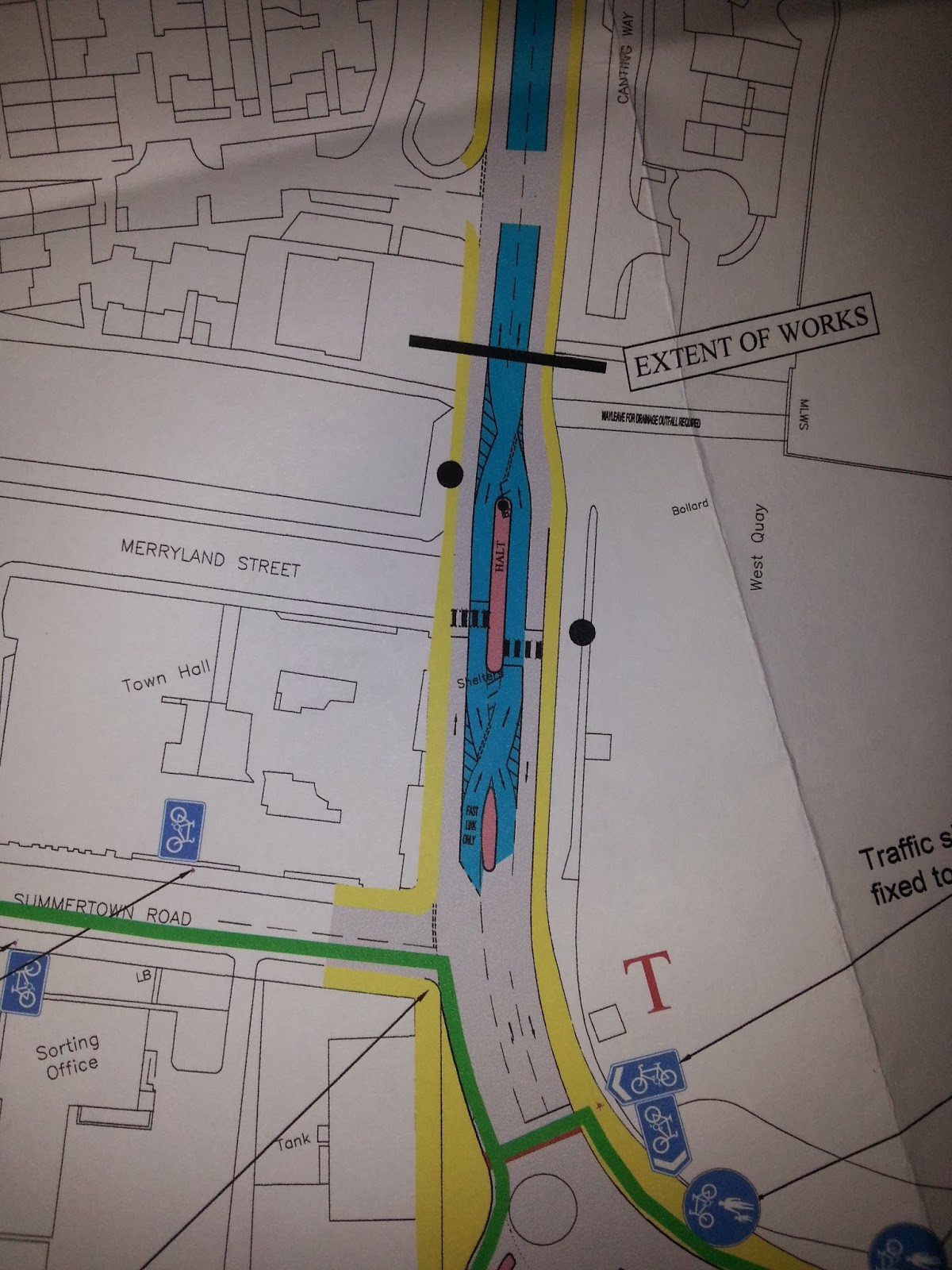 It's Scalextric. Full size. With buses.