Anyone who hasn't been on another planet for the last few days will have seen headlines along the lines of..

OK, that particular headline might be one I have lovingly conjured up myself, but to be fair, it is less controversial than some of the actual headlines that have graced the chip paper over the last week.

I am not going to link to any of them, so if you want to find them, you'll have to search for yourself.  I would ask that you refrain from doing so, as these articles serve two purposes, the first of which is to create controversy and thus to get people clicking through to their website, or buying the paper, thus pleasing the advertisers.

The second reason is that newspapers are struggling. Print numbers are down and online competition for readers is significant. Redundancies at newspapers are not uncommon. The way we consume news is changing and the old guard is fighting for survival.

Of course prejudice of this nature is nothing new. In fact one of my claims to fame (I mean infamy) is that I'm one of the first cyclists (perhaps not the first...) to be labelled a vigilante. I even wrote about it way back in the frontier days of 2008.

My 'proudest moment' in that debacle  was being called by John Smeaton in the Sun Newspaper, Ped-Al-Qaeda. 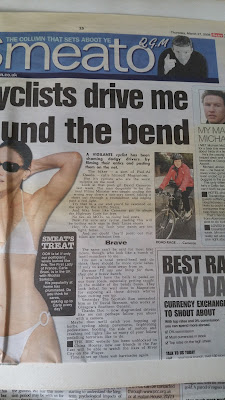 So, just about everything that has been written is the recent articles has been said before. None of it is new. Prejudice rarely is.

So what's happened to me since 2008. Have a descended into a spiral of vigilantism? Do I now cycle around wearing a mask, pants outside my tights, with a butler back at helmet cam cave?

Hmm, not quite. I'll leave you to decide how I've turned out. However, one thing is certain, I wouldn't be where I am today without my helmet camming. I don't mean that it made me famous and I'm now lapping in the spoils of fame and fortune....Oh no. I mean that I learned so much about cycling, road safety, road infrastructure, and the need for change, and all that came as a result of publishing videos.

Over the years I've heard absolutely every argument against my cycling and cyclists in genaral. I honestly don't think I could be surprised by anything anyone could say. Each time I faced a new argument, I went away and learned the truth behind that argument. There is no road tax. Cyclists rarely hold up traffic. Cyclists do not generally go about terrorising old grannies.

I've also learned that it's not about cyclists at all. It's not even about people on bikes. It's about people. It's about making our cities, and our countryside people friendly and not just friendly to people who are driving a car.

So, I'm sorry. I'll be wearing a helmet camera for the foreseeable future. But I will also be doing everything else I can to make cycling safer, either through Pedal on Parliament or otherwise.

If that that makes me Ped-Al Qaeda, then so be it.