Having finished the Ultimate(ish) helmet camera review (see the tabs above), I was fortunate enough to be trusted with another camera to test. Docamsports felt that their new addition, the DogCam Bullet HD Wide (DCBW) was enough of an improvement on the standard DogCam Bullet HD that it required testing. So a DCBW was dispatched my way for testing. 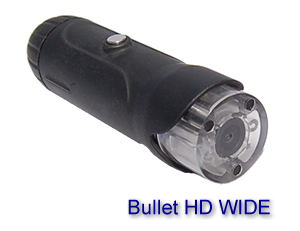 My thoughts on the standard bullet are here, and you can see I was a little disappointed with it. Yes, it was cheap, but it's button was fiddly, the field of view was very poor and it was difficult to tell if it was on or not. You just couldn't see the LED lights!

So is the DCBW any better?

Well, it certainly looks different. It's a wee bit longer and it has a clear section on the front. It's longer to accommodate the a wider (and yes more expensive) wide angled lens. This lens 'laughs in the face' of its standard wee brother widening the filming angle from a paltry 63 degrees to a much more respectable 135 degrees. That's a good start.

The clear front also serves a purpose, it makes it much easier to see the operation LED lights. That doesn't mean to say it is perfect. In bright light it can still be a struggle to see the lights (green for power on or charged, flashing blue to indicate recording, and red to indicate that the camera is charging). However, it is an improvement and with a bit of squinting it is fairly straight forward to see the lights.

The button also seems a lot better. On the standard bullet I had, the button was very, VERY sensitive. This meant that I would be cycling along and the camera would be switching itself on an off. Very annoying. I may of course have had a faulty unit. However, the DCBW's button has a definite click to it when switching on and off. So I haven't had issues with the power cycling. Mind you, beeps to indicate what state it was in would have been a useful addition as well.

It comes with a 2Gb card (enough for just under an hour of filming) as standard, but can be upgraded to 32Gb. Of course how much you can record in one go will be limited by the battery. Something that is fitted into the camera and thus can't be swapped or changed. The claimed battery life is 1.5 hours. From my testing this seem just about right. At least in reasonable temperatures. It is likely to be shorter in winter. With 1.5 hours filming time you'll have to keep juicing it regularly, and long filming sessions won't be possible. Charging takes about 1 hour from flat.

I have also been reliably informed that the battery is rated for at least 1000 charge cycles. So if you cycle 5 days a week (45 weeks a year), and need to charge for each leg of the commute it'll take 2 years to approach that number of charges.

The camera comes with a number of mounts, that is sticky velcro things, fabric holders, and rubber holders, head bands  etc. Quality is ok, but not amazing. Of course you do get what you pay for, so this is probably to be expected, and due to it's size and weight it isn't too difficult to bodge a reasonable fit to whatever you need to fit it to. I'm not sure I'd trust the sticky velcro holders to remain sticky through a Glasgow winter though...

It also comes with two screw on backs that protect the memory card slot, USB connector, and microphone.

Anyway, that's enough of that. How good is it? What is the all important video like?

Here are a few videos of it in use. The first is a comparison with my Contour GPS (before it had a final firmware tweek to improve the video).

Please note. In these three videos the waterproof back cover is on. This muffles the sound recording. There is a second cover for use when dry which will greatly improve the sound. I will test this shortly and post the video as a separate blog which I will link here.

The second is a wee run in I had with a 'young gentleman'.

And the third is a different perspective on traffic filtering.


You'll see from the rear footage that the video does suffer from a wave effect (due to the rolling shutter). However, this is partially my fault. Once I bodge together a firmer fix onto my bike frame most of the wave effect should disappear. It is certainly no worse than many cameras in this price range. But, it is something to take into account.

Overall though I think the footage is good considering the cost of £145. (Actually £130.50 if you use the code 'magnatom' at checkout!).

In fact, I've gone and bought one myself and it is now permanently on rear view duty (no not video of my bottom!).

Would I recommend this camera? Yes I would if you can't stretch to a more expensive model.
Posted by magnatom at 14:49