No, don't worry, I haven't had a major incident on the road.

What I have had over the years are plenty of mild to moderate incidents where, it wouldn't have hurt for the police to 'have a chat' with other road users.  There is nothing that can bring events into focus like a visit from the police at your door discussing your driving/riding etc. Of course I've never had that experience, but I know that having the police come to my door to 'express concern' about my driving/riding would have a profound effect on me and most other drivers/cyclists.

Of course, some would suggest I am long overdue such a chat about my cycling!

Over the years I've contacted the police 3 times for incidents, and yet I've had plenty more where the 'chat' would have been worthwhile. I've also had plenty of videos where I've had YouTubers making the following comments:

Have you contacted the police?

You REALLY need to contact the police about this one!! 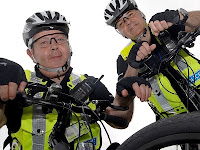 If I did call the police, which would I prefer to turn up?


So why don't I contact the police more?
There are a couple of reasons. First, I suspect that whilst the police might take my incident seriously (they may not of course!), they are busy and underfunded and so their time is limited. The last thing I want to do is drag officers away from a more serious incident, not that some of my incidents aren't serious of course.

However, the biggest issue for me is time. My time. Here in Glasgow and East Dunbartonshire to report an incident I need to contact the main police office by phone. I then need to either visit a police station, or have a visit from the police at home or work. All of this takes time, which when you have a busy job, and a family with three young children is difficult to justify personally.

So a lot of incidents go unchecked, apart from being published on YouTube of course.

So what can be done?

There is an answer. The Metropolitan Police in London have come up with the RoadSafe initiative. The MET have set up a dedicated unit that deals with reports of poor road use. That is, dedicated officers who only deal in road incidents such as those I've encountered from time to time. Not just from cyclists of course, from any member of the public.

What is important is that the reporting can be done online which means that it is very quick to report and easy to link the police to any footage you may have of the incident. Even more important is that they get results. For example the following is an excerpt from the Roadsafe website.

The team from Road safe London recently received a complaint from a cyclist, that a London bus driver had been recorded on camera driving a bus below what the complainant considered to be an acceptable standard.
Road Safe London contacted the bus company concerned and informed them of the existence of the video footage which had previously been posted on “You tube” by the complainant.
As a direct result the driver concerned has been invited to attend a disciplinary hearing. A company representative of the London based bus company said “We take driving standards extremely seriously, and have a number of initiatives, to improve driver awareness and promote road safety. These include driving instructors travelling on our buses in plain clothes, safety posters highlighting cyclist’s vulnerability, and on going training for drivers”.
So, perhaps it's time to look at expanding these services beyond the limits of London. Maybe instead of having a Roadsafe London, we should have a Roadsafe UK. Perhaps it's time to campaign for Roadsafe's expansion.

However, I'm a scientist by trade, and whilst emotionally expansion of Roadsafe seems like a good idea, does it actually do 'what it says on the tin'?

What are the cost implications? Perhaps, by setting up a dedicated unit and focusing resources, costs actually go down.

Does Roadsafe London actually make a difference? Are there any statistics that show progress. Do the users of the service feel it makes a difference?

Is any of this data available?

If all of the above suggests that Roadsafe works and is economically viable, then surely the case for expansion is straightforward.

Surely all of our roads should be safe for all road users, not just the roads of London.
Posted by magnatom at 13:10