The Day I became Famous/Infamous...... ish

It was the 25th March 2008. It was a fairly typical day at work, at least it was until I got a phone call from my wife.

Mrs Mag: Your on the STV lunchtime news! They are trying to find out who the ‘vigilante’ cyclist is, called Magnatom!

Me: Oh, poppycock! (Or words to that effect)

This was the first I knew of what would become a very interesting day….

I’d been posting my youtube videos for quite some time by March 2008. My videos seemed to be having an effect on those who viewed them. There were those who looked at my videos and thought my videoing of incidents was a good thing. Highlighting road safety issues, showing what happens on the roads when there is a cyclist about. There were also those that seemed to think I was the spawn of Satan. In fact I appeared to affecting people enough to gain my own cyber stalker.

Why people took such a dim view of me, I do not fully understand. I know that on one of the forums that I posted (bloodbus where I tried to reason, but I was often threatened and lied about), some would say I could come across as condescending when I tried to discuss road safety issues. Maybe I did come across like that, but it was never my intention. I just believe in the rights of cyclists on the road, whilst admitting that cyclists are sometimes their own worst enemies (i.e red light jumping, pavement cycling etc).

On bloodbus, a couple of characters took a particular dislike to me. Hamsters4breekie, The Paramedic (who allegedly died), HamiltonNutter and later Paramedsis (who claimed to be Paramedics sister) all took exception to me, mainly for the fact that I was a cyclist, and all cyclists were scum. On one particular day though things got very nasty. Paramedsis claimed to be a policewoman working in Glasgow. She had provided quite a lot of details about her work, so it might have been true. HamiltonNutter had also claimed to have met her whilst working, so that backed up her story.

Anyway to cut a long story short Paramedsis made claims online that she had previously caught me for drink driving and that was why I cycled to work (not true of course!). A lot of commotion occurred at that point and after some research it was found that not only was she, not a police woman, but she probably wasn’t a she. In fact Paramedic, HamiltonNutter, and Paramedsis were all the same person and appeared to be out to discredit me!

Hamsters4breekie (I later found out who he was in the real world and he was another who had multiple online persona) did something similar, claiming that I had got him the sack from First Buses (since proven to be a lie with the aid of First). 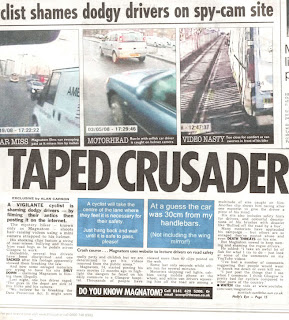 Shortly after all of the hullabaloo I started receiving death threats on my youtube videos and one was sent privately to me. Things started to get nasty. The threats had obviously caught the eye of a freelance reporter because I received an e-mail message from him asking to chat to me about my videos and the abuse I was receiving (he mentioned the Sun, so I didn’t contact him). He decided to run a story on Magnatom anyway and an article appeared in the Sun (unbeknownst to me) on the 25th March 2008 (see left).

Obviously STV caught sight of this and decided to run the story as well. So without my knowledge the Sun and STV were asking people to phone/text in, if they knew who the ‘vigilante’ cyclists was. :-o

I was faced with a dilemma. Should I talk to the press, and reveal my identity, especially considering the threats that had been made against me, or should I remain quiet. The problem with remaining quiet was that I would have no control over what the follow up stories would be, especially in the Sun, although the first had been reasonably positive.

After having a chat with the police where they suggest that, as I wasn’t Marin Luther King, it was unlikely that anyone would go out their way to harm me, and after consulting with my wife, I decided to contact STV and to do an interview with them. I hoped that in doing that I could get my point of view across and it would head off any negative press that the Sun might have been planning the next day.

Here is what resulted.

Following this, the sun posted an article the following day, where they took all of the text from what I said on the news interview, although the day after that in John 'smeato' Smeaton's column I got called an Al Qae Pedal cyclist (I laughed at that!). Overall though, the press was positive and my decision to do the interview with STV had worked out well. I even got on Radio Scotland a week later!

Thankfully, after that, things returned back to a more normal level of abuse and I started doing after dinner speeches at a reasonable fee. Ok I might not have any takers yet ;-). The death threats slowed to a trickle and most of the abuse I get now is of the get a life/job/car etc all of which I have, thanks! :-)

Who knows, maybe out of all of it a few people might have realised that cyclists should have as much respect on the roads as everyone else, just as cyclists should respect others. Maybe a few drivers will think twice when driving around cyclists Does that cyclist have a helmet camera? And who knows, maybe I have increased the turnover of a few companies that sell helmet cameras........