Advanced Stop Lines (ASL) are the Spawn of Satan. There I've said it. I'm certainly not mincing my words.

So what exactly has led me to this opinion?

First let me show anyone who doesn't know what an ASL is, a picture of one.


Oops! Sorry, there seems to be a bus in that one. I'll try again. 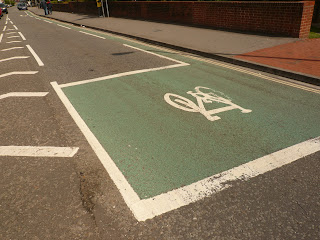 There you go. It is usually a red or green zone in which is designated for cyclists to wait in when the traffic lights are red (yes a lot of us do stop!). It places the cyclist at the front of the traffic queue. The idea is that you are very visible to the traffic behind you because you are sat right in front of them. Most of the time that works really well. Unfortunately there is one minor problem if you have an HGV behind you.


Ah. That's unfortunate the blind spot is exactly the same shape as the ASL. That is a bit of a problem, but that is not why I despise them so much.

There are many ways that you can categorise cyclists. Lycra clad cyclists, shopping basket cyclists, all the gear/no idea cyclists etc. The list is very long. However, when it comes to utilisation of cycling infrastructure (and I am ignoring anarchist cyclists who ignore all infrastructure) there are two types of cyclists. Experienced and inexperienced. There are significant differences in how these two groups use ASLs.

Some would disagree, but I'd class myself as an experienced cyclist. I've been at it for over 6 years now, and I try to keep myself safe. So what goes through my mind when I approach a junction with an ASL?

You can probably tell from the flow chart that more often than not I ignore the ASL. I either don't need it, won't gain any advantage by using it, or find it too dangerous to get to.

So what goes through an inexperienced cyclists mind when they approach the same junction?

OK, I'll admit I may have been a bit simplistic and made a huge sweeping generalisation, but there is some truth behind it. Many cyclists see ASLs as a target.
There is an ASL at the front of that queue, I'm damn well going to use it!
To be fair it's an understandable response. You would expect that cycle infrastructure was designed and implemented in such a way that it would make cycling safer. It is probably reasonable, as a new cyclist, to expect this.Unfortunately, this is often far from the reality. Left side feeder lanes are an excellent example of this. 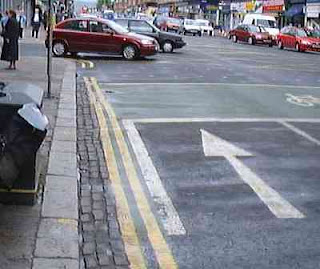 What a wonderful feeder this is. It's not only  extremely narrow and takes the cyclist right next to the wobble cobbles, it also incorporates its very own slippery yellow lines. Marvellous. But it gets worse. Look ahead. This feeder, and many like it encourages the cyclist to filter up the left hand side of traffic on approach to a left turn.
Let's imagine the cyclist filters up here and the lights change whilst the cyclist is still in the feeder (an inexperienced cyclist who hasn't worked out the timing of the lights). The cars start pulling off. The car that is now moving at about the same speed as the cyclist and is to the cyclists right is taking the left turn. However, this driver didn't indicate, which happens from time to time. The driver also hasn't noticed the cyclist to his left, which also happens from time to time. Unfortunately the cyclist hasn't been cycling long enough to develop fully operational cycling spider senses, and so doesn't anticipate the left turn. He keeps on pedalling.
The car turns and....crunch. One very hurt cyclist.
Now imagine the same scenario except this time the car, is not a car, it's an HGV.......
But cyclists filter up the left hand side at junctions where there no ASLs!!!!
Correct. I still think ASLs are partly to blame for this. Imagine that the inexperienced cyclist has came across a few junctions where the infrastructure, that is surely designed to be safe, encourages them to filter up the left.  What do they then do when they come across a junction without an ASL? Filter up the left of course. It must be safe!!
I suspect this cyclist is a great believer in ASLs...
You can probably sense a pattern emerging now. It would seem I am not a big fan of ASLs. I haven't even mentioned the fact that they are generally ignored by drivers anyway, or that the painted surface is sometimes more slippery than normal tarmac or that their very existence sometimes antagonises drivers. I could probably write a book, just on ASLs.....probably not a very interesting book, admittedly.
There is, though, one final rusty nail that needs to be hammered into the coffin. For me, the worst thing about ASLs is that they waste time. No, they don't waste the time of road users. Yes I feel they waste time for the council employees that have to paint them, although that is not what irks me the most.
They waste huge amounts of cycle campaigner time. I am always saddened to hear of campaigners and campaigns who wave flags and claim victories when they have convinced a council to implement more ASLs.
It's further proof of the councils commitment to cycling.....
Oh no it isnt!!
It is time, effort and money wasted on cycle infrastructure that is downright dangerous, encourages poor cycling practice and has probably contributed to the deaths of some inexperienced cyclists. The councils only implement them to tick a box. To fulfil a commitment that might just get the councillor a few extra 'cycling' votes at the next election.
It is time to stop wasting time with utterly useless infrastructure and think big. If we really want to increase the modal share of cycling then we need to put infrastructure in place that doesn't just tick councillors boxes, but it make cycling safer, easier and more convenient.
This is why I now fully support the objectives of the Cycle Embassy of Great Britain. Not because I think we need another campaigning organisation, there are plenty of those to chose from, but because they will not accept second rate infrastructure.
Lets make a stand and Amsterdamize, the streets of Britain!
Posted by magnatom at 13:00