You might have noticed me mentioning a petition to Glasgow City Council recently. Yes, I may have mentioned it once or twice!

I have to say, the response to it has been impressive. After only a couple of months and with only word of mouth and a bit of Twitter and Facebook, the petition is sitting at over 1700 (1717 at the moment to be exact). It also contains many, many comments making it clear that cyclists (and non cyclists of Glasgow) do not think Glasgow has been delivering on cycling up until now, and that now is the time for change.

So yesterday, at fairly short notice, I organised a hand in event at the City Chambers where Frank MacAveety (cycling czar), and Alistair Watson (closest thing GCC has to a head of transport) came to receive the petition. I'd asked if anyone would like to come along. Knowing that it was happening during working hours and during the Commonwealth Games I knew I was asking a lot of people.

Despite that, 40 cyclists of all shapes and sizes turned up (thank you all for coming!!!!!) and did a wee lap with me and the petition around George Square with some cheers from the nearby pedestrians! We then handed the petition over to Frank and Alistair and had a few speeches. 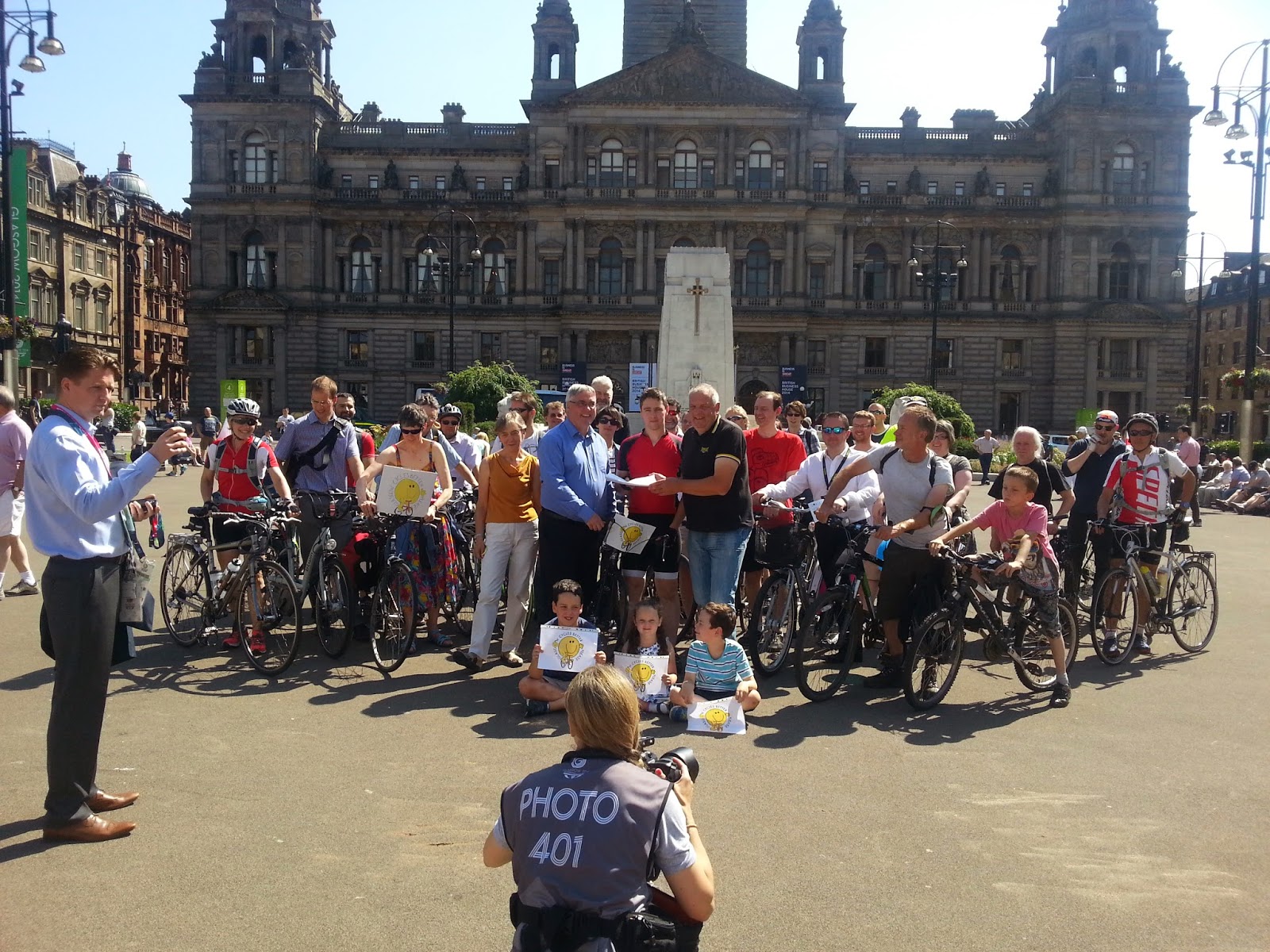 The speeches were recorded, but due to the lament of a nearby piper you can't hear what was said (unless someone else has footage!). Suffice it to say both Alistair and Frank said nice words and said how they supported our cause. They are politicians after all.

I did find something interesting out, though.

Before the speeches Alistair had a chat with me. He said he was supportive but pointed out that there were those in the council that were not on our side. Some are great believers in the combustion engine, apparently. He pointed out that it was always going to be difficult to 'take space from cars'. He did though, point out that there were ongoing infrastructure projects that were 'doing the right thing'. At this point Alistair mentioned the new cycle infrastructure going in around the Southern General Hospital. He said this was a sign of good things happening and an imminent change in direction of the council. At this point I realised that he hadn't been reading my blog!

I'll be honest here, I think Alistair was genuine. I think he did honestly think that GCC was making forward strides and that they were starting to cater for cyclists. In my opinion he just doesn't understand that infrastructure like that going in around the hospital isn't helping anyone. Our message hasn't got through yet.

Bad news? Perhaps not. We just need to make sure we get the message through, and I think there is a glimmer of hope there. During the speeches Alistair and Frank suggested that we should meet up to discuss our issues. Thus I'll be organising a meeting shortly. So there is a window of opportunity to get a strong message across, and I'm not one to hold any punches!

I am going to ask to give a presentation at the start of the meeting (they may refuse), where I'll be as honest as I can about the situation in Glasgow. I'll discuss why the current direction that GCC is taking is the wrong one. I'll also try and demonstrate that by spending a small amount of transport budget on cycling, over a period of time, Glasgow could be transformed into not just a cycle friendly city, but a people friendly city.

Perhaps you could help by sending me details of infrastructure in Glasgow that you think demonstrates where they are getting it wrong!

I won't be alone at the meeting, and I hope that Go-Bike and some others will be represented to. So watch this space. I'll try to keep you update.