Having been campaigning with Pedal on Parliament and focusing on what the government needs to do, generally it feels like I am on solid ground. With POP, whilst we don't have a direct mandate, we do have the general backing of those who attend the events. It feels like we have a strong voice and we try our best to use that wisely.

As an individual blogger, things are a bit different. Effectively my blog is my opinion. It isn't anyone elses. That doesn't matter too much though as a blog is a conversation point. I'd be amazed if everyone agreed all of the time.

However, it felt like the time was right to stick my neck out a wee bit and to test the waters in Glasgow, so I set up the petition.

Would people sign it? Would anyone actually support it? Was I alone in thinking that Glasgow needed a metaphorical kick up the saddle?

It would appear that I am not alone.

At the time of writing the petition has above 1600 signatures with many leaving powerful comments. Several cycling groups have e-mailed or tweeted support and many people have said to me that this was long overdue. Cycle campaigners that I and many others respect greatly, have written passionately on the subject supporting this approach (see below).

So it would appear that the time is ripe for change in Glasgow. It's time to take these thoughts and feelings directly to the politicians.

So if you happen to be free, why not join us outside the City Chambers on Friday (25th July). If you have a bike, why not bring it at 11:15am and we can go for a quick cycle around the square (and the press who are coming might take a picture or two). Then at 11:30am we will hand the petition over to councillors. You could bring a poster or a banner to brighten things up to. Perhaps the one below which was kindly produced by two friends on Twitter (@walternewton and @suicycling). 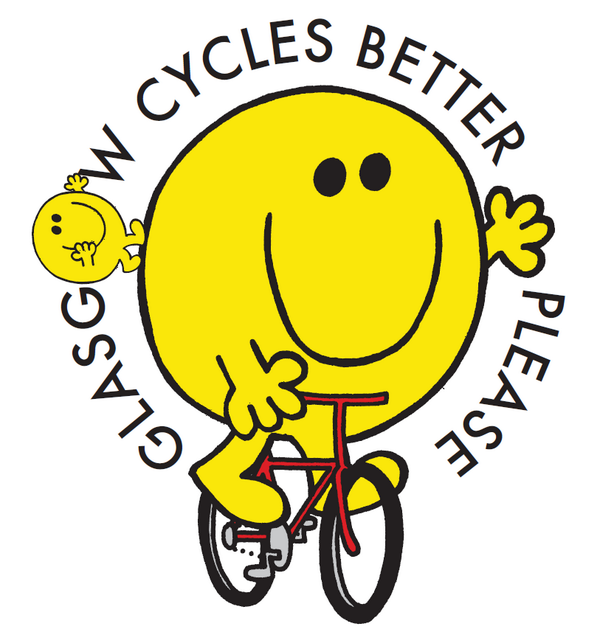 The following is a letter sent to the Herald, written by Norman Armstrong from Freewheel North. Norman was happy for me to reproduce the letter here.

Louise White was sitting in this morning on BBC Radio Scotland’s Call Kaye to lead a discussion on cycling. I went head to head with a motoring journalist from the Sunday Times who was keen to perpetuate the myth that motorists pay for the road space they use while cyclists do not.

The opposite is the case. No industry receives more subsidy than the automotive and oil business. Conversely cycling investment, looking at things holistically, has no cost.

The tax on petrol, vehicle and excise duty, VAT on motoring products nowhere near matches the cost to society of public space dominated by cars, not to mention of conflict in parts of world rich in oil.

For seven thousand years of human civilisation the purpose of public space was to facilitate human conversation and society. The space between primitive dwellings became living streets and squares where science, philosophy and economics evolved as a result of the melting pot that communal space represents.

Come the mid 20thcentury and the motor industry strove to eliminate the fabric of community in order to sell roads, cars and oil. The attrition of corner shops, cafes, pubs, water fountains, libraries, local clinics and schools goes on today. The financial cost is principally to the NHS as the removal of active space creates an inactive population and the isolation from the loss of community leads to an epidemic of social and mental health problems.

Walking and cycling on the contrary has negative cost since it positively contributes to society. A street design strategy based on human metabolism not only eliminates the cost of having to buy fuel, it transforms obesity into health and could solve most of Scotland’s social, energy and economic problems, even isolation in old age. When I was kid in the 60s the street was a playground served by local shops. Granny would sit out on the porch. Now that street is just a rat run for traffic and parked cars, there are no shops, you have to drive to Tesco, miles away. Kids are watching screens and granny is stuck indoors.

Scientific rationality evolved in the living realm of Ancient Greece, the squares and market places of Athens. The fact there is so little rationality in the cycling debate may be because there is no public arena in our communities where one might come up against cogent argument. Crackpots seem to dominate discussion and demand licenses, insurance and high visibility for cyclists. Any review of the evidence conducted in a spirit of truth shows that cyclists are not the problem. In the first decade of the 21st century 36,000 people were killed on British roads, out of these 10 at the most could be attributed to cyclists in any way. In the same period 300,000 died from traffic pollution. How many die from the effects of inactivity and obesity in places where walking and cycling is difficult?

The economic cost of a car dominated society is gigantic, but the human cost is greater.
Posted by magnatom at 21:36