Cycling with the Enemy?

Anyone who reads this blog will know that I was fortunate enough to go to Amsterdam with BBC Scotland to film an item for Reporting Scotland and Newsnight Scotland on cycle infrastructure. For background it is worth watching the item here, and reading what I have previously written on the subject, here and here.

Ok, some of you won't read my previous blogs....can't understand why.... but at the very least watch the video.

There were a few controversies surrounding the debate on Newsnight Scotland, and a lot of that focused on what Alan Douglas said during the debate.

The controversial comments can effectively be summed up as follows:

As a cyclist I know exactly why that would irk many. There was also the suggestion that Alan had colluded with the main presenter Gordon Brewer before the debate started to do a 'hatchet job' on Chris Oliver.

I'm not one to let an opportunity pass, so I asked Alan via Twitter if he would be willing to meet. After a bit of persuasion, and a promise that I wasn't a nutter...I'm not honest...we arranged to meet.


It was a bit cold and it was a bit damp, but as I stood outside the Burnbrae Pub in Milngavie a cyclist dressed in a red jacket and a black cap made his way gingerly across the road towards me. He was riding a slightly rusty, but fully functional ex rental mountain bike which I suspect was a world away from the luxury cars that Alan Douglas is used to driving as part of his day job. It was however, very clear from the start that Alan was making an effort.

So for the next 40 minutes or so, Alan and I chatted, cycled a little and looked at the infrastructure in the area surrounding the pub, which just so happened to include my infamous rounabout,


Before we had a look at the surrounding 'infrastructure' we chatted for a good 15 minutes.
Alan was very keen to stress that there was no hatchet job on Chris in the Newsnight debate. In fact he pointed out that when he came into the studio before the debate, that Brewer specifically said he wouldn't give any clues about what he was going to talk about, to keep the debate fresh. So he was as much in the blue as anyone about the questions that would be asked. Alan did agree though that Brewer was tougher on Chris than he was him. Alan didn't think that was intentional, perhaps a result of the shortage of time, but it no doubt had an effect on the debate.

I obviously had to probe Alan about his assertions during the debate.

This topic dominated much of the discussion. We discussed what typical infrastructure was like...i.e. rubbish, and that I often chose not to use it. Which flowed into Alan's other assertion that,

I pointed out that generally cyclists would use infrastructure if they felt it would help them, but that generally it doesn't. I was actually surprised when Alan looked at the infrastructure near us and commented on it. He actually listed many of the things that I thought were wrong with it, that it started and stopped, and that it weaved in and out. I got the feeling that Alan certainly understood that a lot of the infrastructure that does exist is poor quality. He certainly didn't spot all of the problems, but he understood that problems existed. His issue with cycle infrastructure was in fact more fundamental than that.

Why do we need it in the first place? Why should we be encouraging more cycling? We are not and never will be a nation like the Netherlands. We don't have the culture.

It was when I pressed Alan on what I thought was the most controversial of his assertions that I think I began to understand more fully where he was coming from,

This comment partcularly irked me, especially as I work in the health sector and I understand the significant health benefits that cycling would bring. Alan was at first a little coy about this particular comment, he didn't actually retract it. However, he did suggest that it was a 'throw away comment' made under the pressure of the debate. What he was trying to suggest is that for cycling to have funding, that it would have to compete with many other worthwhile ways of spending the money. Mentioning the NHS was just his way of making the point in a way that was quick to comprehend.

Obviously I pointed out that cycling itself was an excellent form of preventative medicine, and Alan certainly conceded this point, though he was a little sceptical of the statistics....but he was quite firm in his concern that cycling would have to compete with everything else for funding. When I suggested that the funding came from transport his suggestion was that the money should be spent on fixing potholes that affect all road users. We certainly agreed that potholes were a big problem for all. 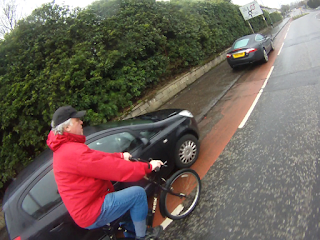 By this time we were both getting a bit cold....we never made it into the pub....so we went for a short cycle along towards my infamous roundabout. Alan leading and myself following close behind. It was at this point that I explained his road position wasn't the best. He was cycling in the door zone. I explained what that was and why it was such an issue. I suspect that this was something that he hadn't considered before.

The roundabout is designed for two things, flow and speed. Speed of approach at this roundabout (including mine) would have contributed to the incident.

My speed of approach was not wrong, and neither was the speed of the HGV excessive... the roundabout is actually designed (possibly by accident) to allow a vehicle to move quickly through the roundabout if it is quiet. The major fault in this incident was that the HGV driver just didn't see me. He could have stopped if he had looked properly. However, had we both had to slow on approach, due to the roundabouts design, it would have increased my likelihood of being spotted and it would have given us both more time to react.

Road design is the key.

Alan definitely agreed with this, and pointed out that this roundabout had evolved this way rather than been designed this way. He agreed that the roundabout could be better designed for cars and cyclists, and yes, perhaps there could be some specific infrastructure for cyclists that could help.

I then showed Alan what I thought could be done with the roads in the area and how the cycling infrastructure could not only be improved to improve the safety of cyclists, but also improve the look and feel of the area and most likely, the flow of vehicle traffic.

This is what we have 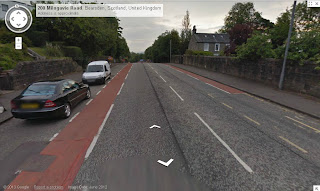 Cycle lanes that are  too narrow, are poorly maintained, start and stop without notice, and that actually take cyclists right through the door zone, the most dangerous place for us to be.

This is what we could have 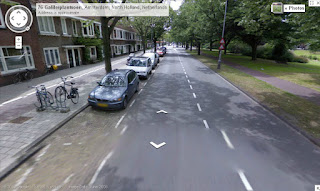 It's actually quite hard to see the cycle lane here. That's the point. The picture is taken from the road and the cycle lane is far away from it, on the other side of the parked cars safely separated from the traffic.

I didn't have the pictures to hand when Alan and I were chatting but I did my best to describe the above possible redesign for the road. As I described it, Alan nodded and agreed that such a change would be for the better, but wouldn't be cheap.

In fact towards the end of our discussions, Alan made one comment that stuck in my mind,

I can't fault any of your logic...

I don't think Alan actually disputed any of the facts that I placed before him, and he didn't deny the health benefits of cycling, or that there would be less pollution, or that there were significant economic benefits to designing our roads for cycling. I think where Alan and I parted ways was in our ideology.

As a cyclist who wants to see non-cyclists cycling, I think that we should be using our admittedly scarce public money to invest in cycling. Alan thinks we should be focusing on repairing the roads as they stand as that would make it safer for everyone. I got the feeling that he was not too bothered either way if more people cycled or not. My contention is that cycling has to be a real option for travel, especially for shorter journeys, and that repairing the roads and building cycle infrastructure could go hand in hand .

Many, many roads are in a very poor state of repair, and have suffered from many years of neglect and poor quality patch repairs. Thus, they are in need of serious amounts of work to bring them back up to standard. So, yes, lets focus on major road repair, but lets kill two birds with one stone. Whilst repairing the road, that's the perfect time to start reshaping the roads.

Effectively the poor quality of our infrastructure represents an opportunity for change. Look at it as a very bumpy blank canvas. On each road you repair, put in quality infrastructure for cycling. Not only will there be more cycling and the many benefits that brings, but there will be fewer cars on the road. the upshot of which will be less wear and tear on the new roads (damage increases to the power of 4 of axle weight).

As you've probably worked out, Alan and I talked considerably more than we cycled. We probably managed only 200 metres of cycling in total. That didn't matter. What matters is we talked, I think we actually enjoyed each others company, we certainly didn't agree, but we both got to see the world from a different perspective.

We shook hands and we both cycled off our separate ways back to our different worlds. Despite the cold weather, I really enjoyed meeting Alan. I haven't changed my convictions in any way, but I think I understand a little bit more about those who oppose money being spent on cycle infrastructure. There are those that are concerned that money spent on cycling will be money wasted on infrastructure that won't be used, and will mean that general road repairs will loose out. Perhaps we cycle campaigners need to address the general state of the roads more in our campaigning.

Did Alan learn anything from me? I hope so, but I obviously can't speak for anyone else. All I do know is that Alan sent me the following in an e-mail after he got home,

If it's a good day tomorrow I might just go out on the bike again...

...but not on the roads. Far too dangerous.

OK, maybe only progress of sorts. What is certain is that progress will only come through conversation and dialogue, so rather than keeping quiet, we need to keep the conversation going, and the most important people to talk to are the ones who disagree with us.