I have the attention span of a goldfish. Therefore, I thought I'd write this for goldfish and split tit into two parts.

I've visited Amsterdam quite a few times in the past in my university days.

Yes, I realise that the above sentence will have quite a few of you jumping to conclusions about why I was there! In fact I was there with the university judo club for an annual judo competition (It was actually in Eindhoven, but we always stopped off in Amsterdam for a day). Depite all of the 'temptations' available I was always very well behaved, and stuck to the beer.

I can state for the record that whilst there on those trips I did not in any way pay attention to the cycle infrastructure. Cycling at that time was not on my radar.

I'm not only older, wiser, weigh about 10 kgs more, and a bit more wrinkled, but the sole purpose of this visit WAS to look at cycle infrastructure. As I've discussed in previous blogs I was very lucky to be a guest of BBC Scotland, and spent a full day in the fair city. I boarded an orange and white coloured plane the night before, with some waterproofs (rain was forecast) a change of clothes, a helmet, some gloves and a helmet camera.

One thing was noticeable by it absence.....Lycra.

My flight arrived at Schipol before David's (David Miller the BBC reporter) so upon arrival I set to work straight away by finding the nearest pub and ordering a beer. Dutch beer of course, which was nice. What was odd though, was as soon as the waitress came over to me she spoke English, and yet when someone else sat down she instantly spoke Dutch.

Had she spotted the helmet in my rucksack?

A while later, and 2 very nice beers later, BBC Scotland arrived in the form of David and Doug  the cameraman.So without further ado we jumped in a taxi and headed to the hotel. This is where I made my first interesting observation.

I happened to be facing backwards in the taxi, and whilst we were chatting about what we were planning over the next day or so I noticed something quite surprising....we were being tail-gated.  We were on the motorway, probably travelling about 60mph and there was a car about 2 or 3 metres back from us. That wasn't a one off either, as I noticed it happening a few times. The tail-gating was actually worse than I normally experience when driving my car back home.

There goes the myth that Dutch divers are better than drivers in the UK!

Morning comes and after a quick breakfast it was into a taxi to find a good place to film (we ride bikes later...honest!). At first we stopped off at a junction leading up to the school and Doug started filming, as did I. Here is what I recorded.

Wait a minute?!? There is no segregation here! In fact there was no cycle specific infrastructure here at all! Not only that, but we also see a driver parking on a pavement and using their get out of jail flasging indicators! Yes, the driver confirmed once again that dtivers in the Netherlands are no better than here, but it was fascinating to watch the way that this four way junction worked. Cyclists and cars mixed effortlessly.

There is a huge misconception that Amsterdam has city wide segregated cycle paths. It doesn't. This was an excellent example of how you can make cars and bikes mix safely. Keep the speed low. You'll notice that on all approaches to the junction there is a ramp, and that ramp encourages everyone to keep the speed down. Keep the speed down, and suddenly everyone has more time to look around and see what the hazards are, and voila, the traffic (which includes cyclists!) flows freely and safely.

Of course there is more too it than that...safety in numbers, most drivers also ride bikes, etc, but designing junctions to slow speeds inevitably makes it safer, which means streets like this where there isn't a huge amount of room for segregation, can still be cyclist friendly.

We didn't stay at the junction for long as we wanted to be outside a school watching how families arrived. So we went along the road a few hundred metres to the nearest school. What struck me straight away was that rather than having a large number of 4x4's parking and jostling outside the school, it had a huge pile of bikes of all shapes and sizes. The camera was set up and we sat just filming people arriving at the school. 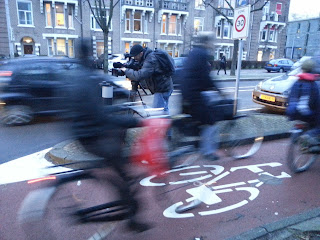 I can honestly say that during that time I saw one child being dropped off by car. Just one. I saw every other child either walking with their parents or as the vast majority were doing, cycling to school. In every other way it was just the same as it is back in Scotland:  people are in a hurry, running late, slightly hassled with slightly misbehaving kids....but no-one was fighting for parking, or jossling for road space. Everyone flowed into the school with the absolute minimum of hassle. That's not to say that there wasn't traffic. Just behind where I was stood there was a queue of traffic waiting at traffic lights, but that traffic was through traffic, and most importantly didn't interact, AT ALL, with the school traffic.

You'd be mad to drive the kids to school!

David and Rob chatted to a few parents as they left the school....cycling is safe...cycling is normal....of course I let my kids cycle... Once finished we had a little time to spare so went for a coffee before we were due at Fietsersbond. Fietsrsbond, the  effectively the Dutch Cycling Union is an organisation that represents the rights and requirements of cyclists across the Netherlands. We were going to meet Gerrit Faber, our cycling guide for the day.

So how did we arrive at Fietsersbond? Yes. OK, we arrived by taxi, but this was to be the last taxi we would take until we needed to get back to the airport.....

Upon arriving at the Fietsesbond office and having tea and coffee, we got down to the serious business of chatting about cycling, cycle infrastructure, and the success of cycling in the Netherlands. On the table in the main office was a large map of Amsterdam. At this point Gerrit explained that the green on the map represented routes that were considered safe for cycling, i.e. had specifically been designed or redesigned with cyclists in mind. What was very impressive, was that there was green everywhere. I couldn't see any part of Amsterdam where there wasn't a spiders web of green routes entering and leaving it. 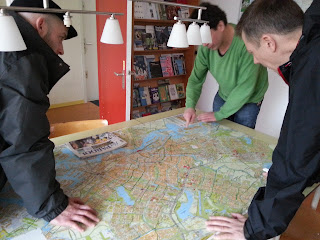 Gerrit did the obligatory interview for camera (mine would be saved for the end of the day) and we looked once again at the map planning our route for the next few hours.

So where should we go?!

Before we could plan anything we needed to work out logistics. We had some equipment to lug around, cameras, tripods etc, so would we need a taxi ferrying the equipment around whilst Gerrit and I went off galavanting?

Just a few hundred metres away was a bike hire shop.......I think it should hire cargo bikes as well....

So a plan was hatched. We'd hire a standard bike for me, and a cargo bike for David and Rob. BBC Scotland would be going Dutch!


So what was it actually like once we got cycling?

Wet. Yes it rained. A lot. Oh and it was cold. It was a good representation of Glasgow.

Oh you mean what was the actual cycling like?

Watch this space for part 2!