You have to get stuff to work, and unfortunately you sometimes have to bring work home. But how do you get it there? Some cyclists swear by Panniers as the answer. You will certainly have less issues with sweaty back syndrome. However, I am proud to be a Rucksack wearer, and have been since I started commuting.

So if you fall into the Rucksack crew, I can heartily recommend a rucksack.

Seriously though this has been an amazing bag for me.

How many times have you read a review saying something was amazing only to find out that the reviewer had only had the item for 2 weeks?! Can you trust reviews like that? Rest assured this is no short term use review. I have in fact been cycle commuting with this rucksack since October 2006. The same one throughout.

I have had this bag just over 5 years. Think about that. That's 5 summers, and 5 winters. I've had this bag longer than I have been filming my rides with a helmet camera! It's been rained on, snowed on, I've came off my bike (a few times) with it on. It has been on my back in temperatures of 28C and temperatures of -15C. Over that time I have cycled many thousands of miles. It has taken a beating.

So what about the bag itself?

It's not a small bag, and that is exactly why I bought it. I needed space, as I tend to carry quite a bit. It's not unusual for me to be carrying, clothes for work, shoes for work, a note book or two, wallet, spare cycling jacket, spare batteries, tubes, multi-tool, puncture repair kit, water, mobile phone etc. So it can carry a lot! It has a nice number and nicely proportioned compartments and very importantly for the poor weather a rain cover (that is Hi-Vis yellow).

It also fits very well with restraining straps on the main shoulder straps and around the users waist. Once it's on I forget it is there. Do I get a sweaty back? Of course I do, but its not too bad, and with the Airstripes system, better than average. Mind you, it doesn't really bother me, and I think it is a price worth paying for the convenience of a rucksack.


So what does it look like now, having been through all weathers etc? Not too bad! 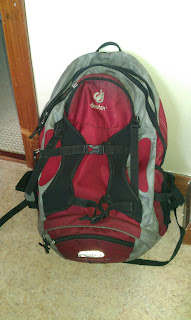 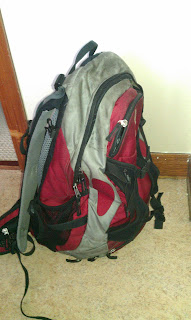 Ok, so it's understandably a bit tatty, but pretty good considering its use. Most importantly it has plenty of life left in it.

So how much is the 'ultimate commute rucksack'? Currently it is just over £80 from Amazon.

Not cheap, but for a bag that does what it should and is built to last, its a good investment.

UpdateJan 213
Chain Reaction  are doing these bags at an excellent price of £65.99. A bargain at that price.
Posted by magnatom at 21:05