As you may have seen recently I had a wee adventure in the snow last Friday. It snowed thick and fast which resulted in me abandoning my cycle commute home. It was only through the generosity of others that I made it home safely and in a timely manner.

There really isn't anyone to blame for the chaos on Friday. As my video demonstrates the snow came down pretty fast, so there wasn't time for the council to react. Yes, perhaps the roads could have been better gritted before-hand, but the weather is often unpredictable in this part of the world. Let's give them the benefit of doubt.

However.....you knew that was coming didn't you....it's what has happened, or not happened since, that is of concern.

This is a typical tweet from the council at the moment and suggests that priority routes will be treated first, then footways and bridges. So roads first and then paths....or at least some paths, certainly not all.  More interestingly there is no mention of cycle paths.

OK, let's be fair, this could just be because they could only fit 140 characters into a tweet, right?! The will of course grit cycle paths, right?


#glasgow cycle traffic not quite as busy as Cambridge. This afternoon only 8 cycles had passed this main route.. pic.twitter.com/zwky2Aq4zC
— Outspoken Delivery (@OutspokenDeliv) January 20, 2015

Ok, so it would seem that cycle paths are not looked after at all. Even award winning ones, or ones with counters on them.

But surely things have improved now that it is FIVE days since the snow fell. Surely by now for instance the entrance and exit to the Clyde Tunnel cycle/pedestrian path, one of the main active travel routes for getting people north and south of the city, will be clear?!

Umm, no. This is from today. 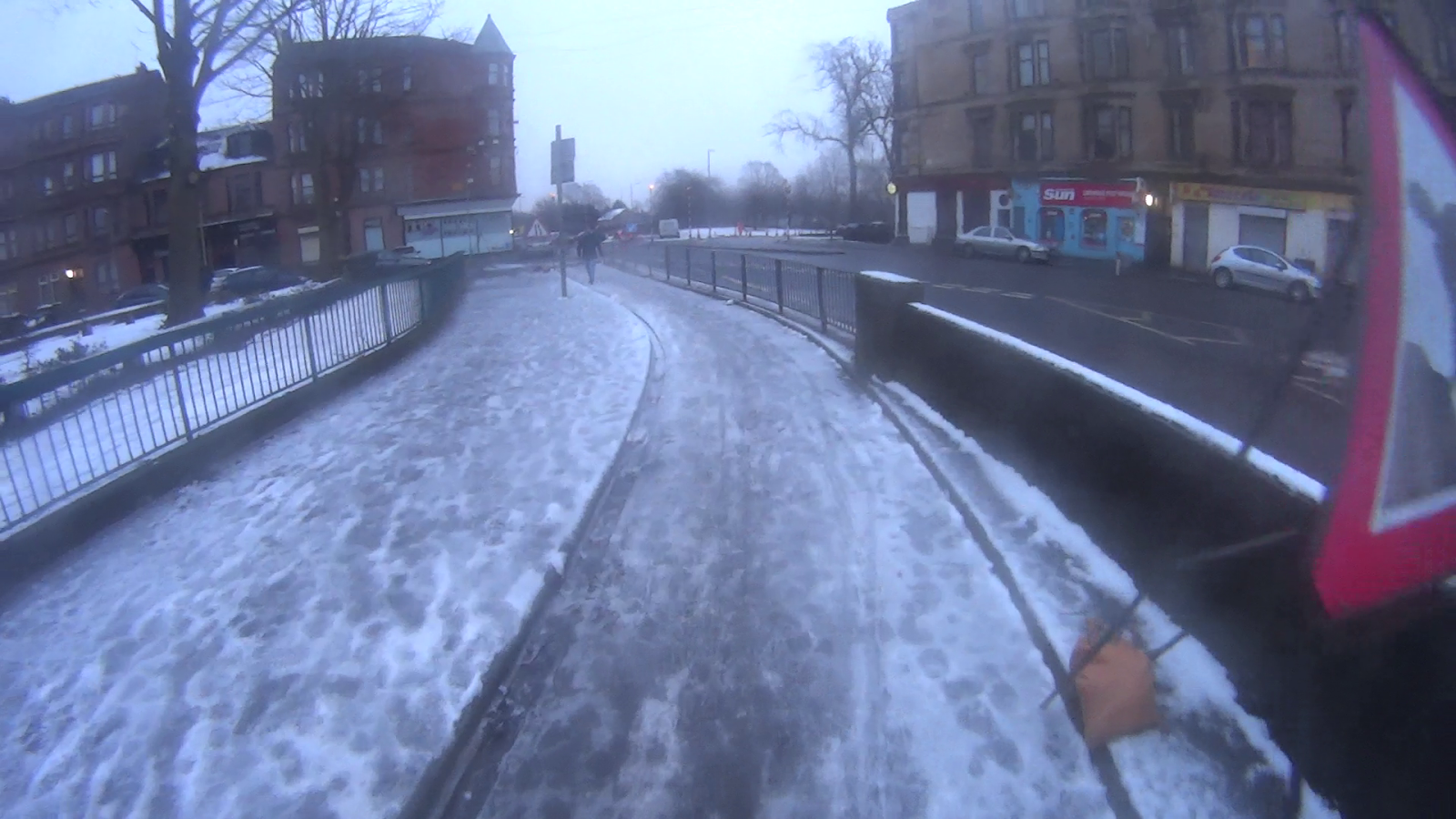 To be fair, it isn't just cyclists that have issues.


Another calculated insult to pedestrians from one of the laziest, nastiest councils in Britain pic.twitter.com/jfCIaQUAZw
— Car-Sick Glasgow (@carsickglasgow) January 19, 2015

That's on a hill.

So, if you are a cyclist and you cycle through the winter months, and if there is a hint of ice around, Glasgow City Councils policy, and this is policy as it is their policy not to grit these routes, is that you must cycle on the road. Cycling facilities, limited as they are, are off bounds.

To be fair, no-one in their right mind would ever want to cycle in the winter when it's cold......would they?

So, it would seem that not only does it snow in countries where cycling rates are high, not only do people keep cycling in poor conditions, but that the authorities in these countries understand that cycle and walking infrastructure should be included in the priority routes.

How many cycle routes are specified in Glasgow's priority list? Well according to this document cycle routes are treated as 'priority 2'. That is, a relatively low priority. Actually, it's worse than that. It is priority 2 for paths. That is the roads come first, then priority 1 paths and then, if they can be bothered, cycle lanes and other paths.

Glasgow will rarely provide decent cycle lanes. Unfortunately these rare cycle paths will very rarely be cleared of ice or snow in the winter. It would seem that a decent, clear cycle lane is a very rare thing indeed.