A Tail of Two Councils


I came across the following video the other day, and I must admit watching it almost brought a tear to my eye. No, it's not love story or a video of a really cute cat, it's a video of cycle infrastructure (did you ever think it would be anything else!?)

This video though is not of your everyday type infrastructure. It most certainly isn't something you would find in the UK! In fact, I suspect that even in cycling 'advanced' countries this is a bit of a luxury.

I'm just trying to imagine what Glasgow central could be like if it had a facility like that.

Back to reality now.....back to the basics.

As you'll no doubt be aware I handed a wee petition in recently to Glasgow, and hopefully as a result of that I'll be able to organise a meeting with Frank, Alistair and others shortly. However, in response to a letter I sent recently related to the petition it was mentioned that a consultation was about to begin for a segregated cycle route in Tradeston.....and so it has happened. You can find the documents here.

My first problem with this is, well, it isn't really a consultation. This is Glasgow, having designed the scheme, wanting to implement Traffic Regulation Orders (TROs). More accurately, they want to actually get full permission to start the scheme. Hmm. This is not how I think this should be done, and I'll explain more about that a little later.

Anyway, please have a look at it and send your responses by the 29th August. I certainly will.

Here is one of the plans, but please look at them in detail. 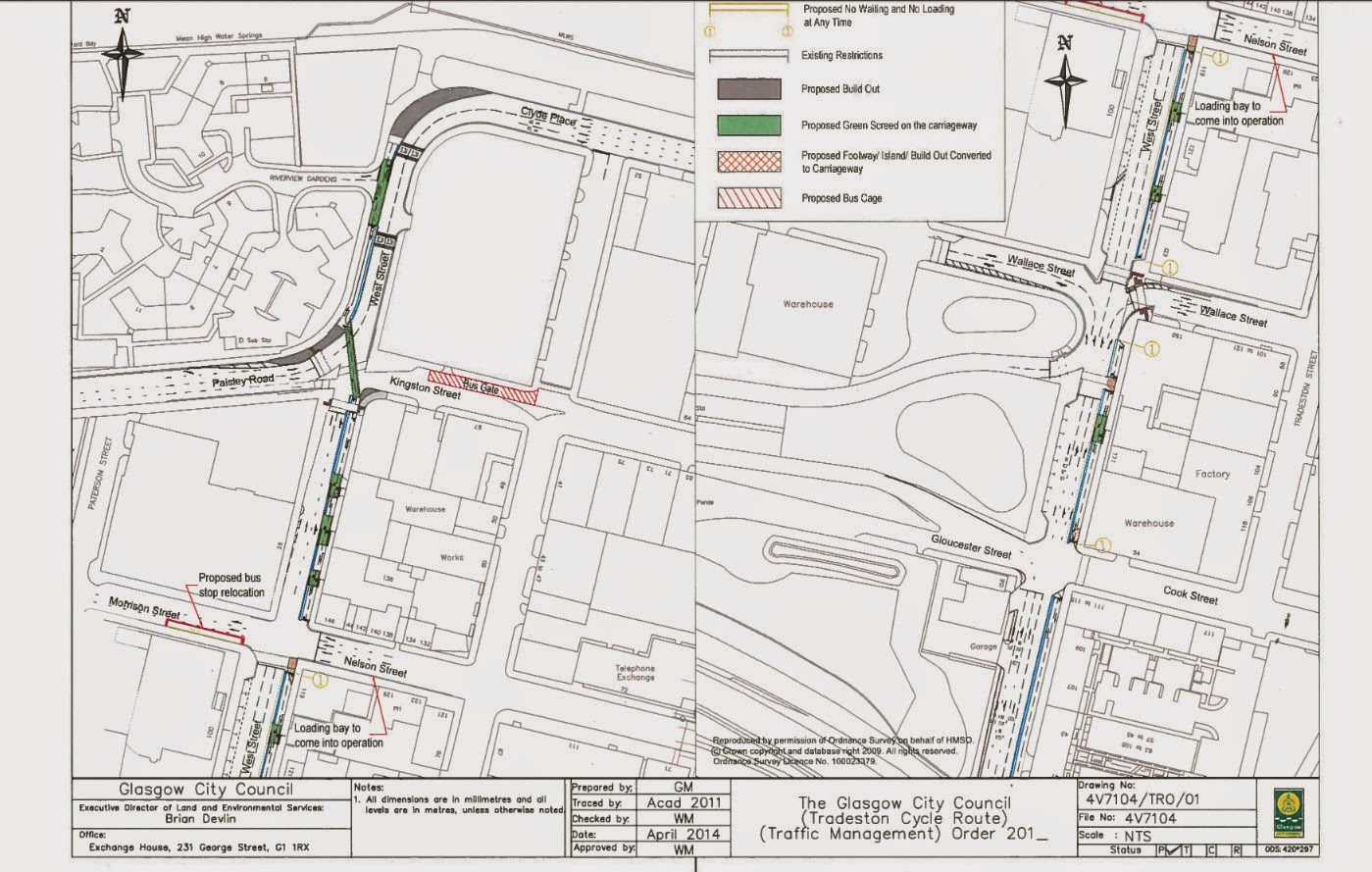 Unfortunately I have a major problem with this. I don't know about you, but I'm not urban planner or road engineer. I find it hard to work out what is going on here. There are even colours in there (the blue specifically) that aren't mentioned in the key.

Looking at it with my untrained eye, I think I can see some issues. At junctions, the very place you need infrastructure, it often disappears. It looks like you have to go on the path in places. It's not obvious how you enter and exit the lanes safely etc.

Luckily there are those that are better at looking at this than me, so if you want to read a critique of this, please look here.

It would appear not.

Move north of the city and into East Dunbartohshire where there is, what I personally think, is a REAL consultation. A few months back, East Dunbartonshire Council (EDC) held a street event where people could come and look at proposed plans for the A81 (part of my commute). The most important part of this was, that they were proposed. This wasn't a TRO. It wasn't looking for final tweeks, it was aiming to hear from stakeholders, i.e. people who actually use the road, what they think of proposals. Change was very much a possibility.

I went along and had a look. I had a few issues, and they listened to those. In fact, and I'll put this bit in capitals as it is quite amazing.....THEY ACTUALLY LISTENED! (Not just to me of course!)

The specific bit they listened to was with regards to the interaction of the segregated lane and bus stops. Originally there was going to be conflict, with the lane going in front of the bus stop. Having listened to me and others, the plans now have the lanes going behind the bus stops. PROPER FLOATING BUS STOPS!!!

Wow! You can see the consultation and respond to it here.

Ok, so the plans aren't perfect. At one point on the route you have to 'swap sides'. It also stops before it gets to my favourite roundabout (ahem) at Burnbrae. However, it is progress and perhaps more can be made.

For an excellent summary of the plans you could do worse than read Car Sick Glasgow's blog here. He covers the positives and negatives of the scheme very well. Please consider sending in your comments.

So we have two schemes, not too far apart geographically, but very far apart in their ambitions, and in the processes in place for consultation and the approach to making them happen. Whilst EDC haven't quite got it right yet, I think GCC could learn a lot from there neighbours. I know which council is closer to making multi-story underground bike parking a reality.