I'll bet most of us can remember our first bike. I can certainly remember mine. It was a Raleigh Speedway. I distinctly remember the racing number plate on the front, and thinking it was really cool. 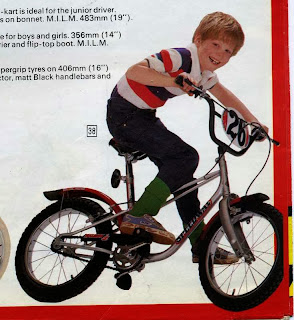 As I grew up in Erskine, a place with many sheltered paths to cycle on (yes I did cycle on paths...sorry!), I progressed through a couple of bikes. My next was a Trak Trail (big gold bike with heavy front suspension on it...would love to find a picture of that!) and then a Peugeot Racing bike (sky blue).

I happily remember cycling along canal paths up and back to Loch Lomond on my Peugeot bike with my friends. Happy days. Cycling though was not a major passion of mine and as I moved through high school my interest waned and I didn't cycle again until 2005 when I started commuting by bike. When I did do it as a child, it had to compete with playing sodgies (pretend soldiers), computer games, or football (I was bad at football!).

Although cycling didn't become a passion until much, much later I do have one more memory of cycling from my childhood that I can clearly recollect . It wasn't watching the Tour de France, I hadn't heard about that until I started cycling again, it was a battle between two cyclists. I remember being fascinated hearing about an unknown Scottish cyclist, who built a bike out of a washing machine who was trying to cycle further in an hour than an English cyclist riding a multi-million pound bike (yes I know it wasn't multi million, but I was very young...). I found it inspiring that a bloke who built his own bike, could take on the world.

I am of course talking about Graeme Obree and Chris Boardman, two legendary cyclists.

I admire Chris for a number of reasons, not just for his incredible career in cycling, but his continued passion for it after retiring, commentating and more recently campaigning for cycling safety. However, in my eyes there is no greater legend than Graeme.

Graeme's life has been documented and written about extensively, so there is no point in me recounting it here. To summarise, he has broken records, created amazing innovations, he has spent probably the shortest time of any cyclist as a pro rider, he has circumvented rule changes that banned his innovations, he has had battles with mental illness and depression, he has dealt with issues surrounding his sexuality and finally, he has come through it all to be one of the most engaging, intriguing and inspiring people I know and have the pleasure to meet.

Graeme is in my mind the perfect example of a true champion.

So why am I waxing lyrical about Graeme? Firstly, he deserves my thanks as he is a strong supporter of Pedal of Parliament and all it stands for. For that I am very grateful. He even came along and supported POP 2! 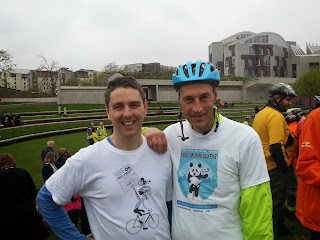 However, there is another reason. Graeme needs our help. Graeme has another story to tell (he has many, many stories to tell!). This story is of his battle with a beastie. This time it's not the beasties from within, but with his new innovation, a human powered vehicle called Beastie. Graeme took on another challenge to break a world record with Beastie and his journey along the way has been filmed by David Street, an experienced filmaker and producer.

The problem with Graeme is, that if you aim to film him for 50 hours, he'll talk for 200, and that is exactly what happened! So to tell this story, and to edit the documentary/film, David needs some financial help. Thus he has set up a kickstarter project asking for help to raise the £20,000 needed to tell Graeme's story.

I've committed some of my limited funds to fund this project, and I'm sharing this with you because I really think this is a film that needs to be made. I am absolutely certain that is is something that will amaze, inspire and captivate. So, if you can, help a hero tell a story, in his own words.

Help fund the Kickstarter project here. I suspect we won't be disappointed with the outcome!
Posted by magnatom at 20:00