Into the Darkness? Let's Shine a light.

It all comes down to facts, and logic. Something that Spock, in the latest incarnation of Star Trek (which I haven't seen yet so no spoilers please!) knows all about. Spock knows that you just can't beat logic. When you have all the facts and figures and you have proved something beyond any reasonable doubt, there can be no more argument. The facts all point to one answer, one solution.
That's exactly where we are with cycling. Investment in cycle infrastructure is....the logical choice. It's the magic phaser...I mean bullet. Invest in cycling and you are investing in Scotland's health, you are investing in a cleaner greener Scotland, you are investing in safer roads, and you are investing in a new modern economy.

But wait....something is wrong....a black hole has appeared on the ships sensors, and it would appear to be sucking the logic away. Yes you've guessed it, there's Klingon's on the starboard bow.....better known as the Scottish Government.

We've been beaming them our facts and figures for a long time now, but their shields have remained up. No matter what attack strategy we use. Logic is wonderful, logic is right, but logic on its own never gets the crew home safely.

Enter James T. Kirk. James is a man full of passion, full of get up and go, full of bluster. Set him off and he'll certainly make some noise. On his own it would be a disaster. He would innevitably get himself into trouble on some distant galactic planet. However, bring Spocks's logic and Jim's passion together, and what do you get? You get the most powerful force in the galaxy.

I suspect you can see where I am heading with this ridiculous blog post now.....

Passion. We need passion, and we need it in bucket-loads. We need to back up the logic which is undeniable, and shout it so loud (politely of course) that the politicians can no longer ignore it. We need to turn up in numbers, as big as we can get, at the Meadows, in Edinburgh, on Sunday at 3pm. We need to turn up, not as cyclists, but as people. Young, old, fast, slow, Lycra'd or jeaned.

I'm not sure if we will have a J J Abrams among us on the day, but I know for sure, with enough people there, with enough polite noise, we can make a scene that will live in the memories of all who take part and witness it. 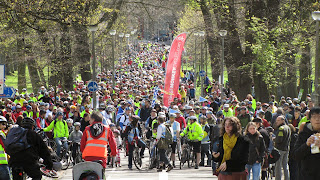