I'd like to apologise for my radio silence. I've been notable by my absence here. There are couple of very important reasons for this. First, I've sort of been organising and taking part in Pedal on Parliament 2!

It was bigger, better and louder (more on that later) than last year. Amazing! Personally the most amazing part for me this year was that my family were there. My kids were pretty much the inspiration for Pedal on Parliament in the first place so it was right that they should be there. They thoroughly enjoyed it and now want to cycle more. Job done.....well partly done...as we are still a LONG way from safe roads, but inspiring children is all part of our job.

I have also been very, VERY busy at work. No, I do not write this blog during work time! Unfortunately work has been severely eating into my personal time over the last few weeks. A deadline had to be met and the onus was on me to meet it. There were a few 14 hour working days in there and Sunday was my only reprieve from the onslaught of work (that's why I looked stressed!) but it is done. Until next time.

But what of this anger that I mention in the blog title? The fact is, there is a lot of it about at the moment. I'm sure most are aware now of the Twitter incident where a young girl boasted about knocking a cyclist off. There is anger there.

There was also anger at Pedal on Parliament 2.

Last year POP was very much a polite affair, and we were all far to polite to even say boo to a Panda. This year, it certainly still was a family affair, in fact even more so. There were far more children and families there than there were last year. Yet, the family atmosphere was definitely tinged with anger. Paul Wheelhouse stepped up to speak, and felt compelled to tell us what the government was doing for cycling....ahem...

We should be grateful.

Funnily enough, the crowd was having none of it and made it quite clear to Paul and the government that we are sick and tired of being told that the government takes cycling seriously, when it is plain to see that it doesn't give one hoot about it.

Feed the cyclists a few crumbs, that'll keep them quiet.

Paul found out that it won't. It's time for the government to stop being condescending. We aren't daft. Telling us that you are doing great things when you aren't just doesn't fly. You are doing hee haw.   That's what I'll be telling the Transport Minister Keith Brown next week when I meet him.

There is no doubt that the government isn't walking the walk when it comes to spending on cycling, but that is only part of the story. What are they actually spending that roughly 1% of the transport budget that they do spend on cycling on?

The government are giving Cycling Scotland money to provide training for cyclists on how to cycle assertively on the roads to keep themselves safe. It's called Essential Cycling Skills pilot. Seriously!? SERIOUSLY!?!?

Let me spell out the governments thinking.

People feel that the roads are too dangerous.  Hmmm...... yes indeed, the roads are too dangerous or at the very least feel too dangerous. What could we do? We have two options here. Making the roads, actually safer is one option.... Hmmm.... That would cost a bit of money.... Hmmm.... Might save lots of money, save lots of lives, but that wouldn't be transport budget savings....anyway health budgets are outside my remit.....Hmmmm....The other option is agree that the roads are too dangerous, do nothing about it, but teach cyclists how to deal with the dangers. Teach them some essential skills......Hmmm..... It would look like we care, cost us little and show that we are spending something on cycling that we can talk about at POP3. Mind you, by suggesting that these are essential skills will be suggesting that riding a bike isn't easy, it's difficult and that we are continuing to encourage that view....Hmmm.....perhaps we could charge a fee or a tax for this essential skill training in the future....Hmmm.......I think we'll go for option two....

I came across a my own personal example of this line of thinking just the other day. Look at the following picture. 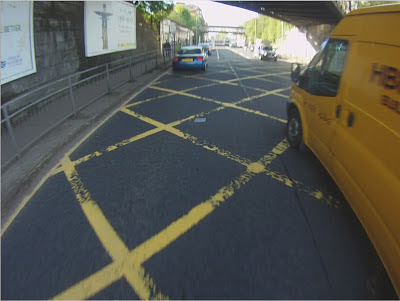 It's a helmet camera picture from a very busy road on my commute. A dual carriageway (Crow Road in Jordanhill for those in the know). I can honestly say in my near 8 years of cycling this road I have never, NEVER, seen any children cycling on this road. I've seen a few on the footpath, but never a child on the road, anywhere from about 2 miles back to about a mile ahead. Not one. Hee haw.

Yet, look at the top left of the picture. There you'll see a picture of a child holding out his arms asking for a bit of 'cycle space'. Brilliant. Just brilliant. So rather than make this road safe (and there is plenty of space to do it) for children, and anyone else for that matter to cycle on, lets just ask drivers, who if they are incredibly, incredibly lucky, might just come across a child cycling on that road, to give just a wee bit of space.

I've certainly nothing against Cycling Scotland, they are in a difficult position having the government as their paymasters. We certainly will need soft measures alongside the the infrastructure measures, but on their own they are a complete and utter waste of tax payers money.

So yes, I am angry. Very angry. The question is, when, if ever, will we get even.