This being 'part 2' of my description of my cycle infrastructure visit to Amsterdam, with the BBC, it really is well worth reading 'part 1' first. If you don't read it this might be confusing....my writing can be confusing enough!

.....we are at the bike shop, we have hired the bikes and we are ready to go. Brilliant! We'll, it was almost brilliant. It had decided to start raining, and it was that type of rain that you know is going to be with you for the rest of the day. Luckily I had brought a waterproof jacket and some gloves. Even luckier, David Miller had brought some waterproof trousers. As I was the star of the item (no I didn't get a changing room with a start on it...pooh), I got to wear the trousers (I'm sure there is a joke in there somewhere...).

There was one significant failure in my wardrobe though....I was wearing a helmet. I was in fact  the only person....THE ONLY PERSON, on a bike wearing a helmet that day in Amsterdam. Talk about a fish out of water! Wearing the helmet also meant that I could not wear the hood of my waterproof jacket. Perhaps this is the greatest argument against helmets. None the less, I still stayed drier and warmer than everyone else in the team.

So off we went.

Having never ridden a Dutch style bike before and I must admit I was a bit wobbly at first. However, I was nowhere near as wobbly as David was on his cargo bike. That is why I strategically placed myself behind all of the others and made sure I switched my camera on.

The plan was to cycle across town, filming as we did, and make our way to a grand and relatively new piece of cycle infrastructure. The Nescio bridge. I know in a previous blog of mine there was some criticism of us focusing on this bridge, however, I'll explain a little later why I think, in the context of the Scottish political scene, that this was the perfect piece of infrastructure to focus on. However, that's enough about that just now. We had to cycle there first.

Initial wobbles out the way, we started to settle into the riding. It very quickly became very easy. Part of that was down to the expert guidance of Gerrit, who I should add, was in no way at all dressed for the wet and cold weather. He got pretty soaked! Despite this Gerrit exuded enthusiasm and knowledge and without his help we would have been completely lost in many ways! However, Gerrit was not the main reason the cycling was easy. the main reason that the cycling was easy was the environment. The roads were just incredibly easy to cycle on.

Yes, I can hear the car lobby shouting in the backround as I type.....IT WAS EASY BECAUSE IT WAS FLAT! Yes, indeed, physically is was a very easy city to cycle around, but the ease I am talking about has nothing to do with physical exertion.

It was ease of the interactions with other traffic.

My one regret was not getting to cycle during the rush hour. I'd have loved to compare that to what I am used to back home in Glasgow. However, it wasn't exactly quiet during the time I was on the bike. There were cars, there were lorries, there were trams, (none of those in the major Scottish cites.......yet.....) and there were plenty of them. There were also plenty of cyclists and plenty of pedestrians. We all had to interact. Yes there were quite a few segregated cycle lanes, and these were great to cycle on, but there were also plenty of sections where you were on the road with traffic. 100% segregation is not the answer in Amsterdam and it certainly will not be the answer in Scotland.

It really was that simple. Where we were mixing with cars, speeds were low. Where we were segregated the cars could often drive a bit faster and were on main arterial routes.

One of the biggest surprises to me personally was the success of the cycle only contraflows, that is roads where cyclists can go both way, but cars can only come one way. I know that these sections of road are succesful mainly because..... I didn't even notice I was riding on them. Seriously! Gerrit took us down some streets that were narrow and had parking to one side. Whilst cycling down them we did come across some cars and vans, but it didn't occur to me that they were only coming one way. It didn't occur to me because we were cycling down them and we were chatting away to each other, as it felt so safe.

I only noticed that I had been cycling down these cyclist contraflows when I watched my helmet camera footage back!

Why did they work? They worked because the road had been narrowed and there were speed humps. Cars had to drive slowly, not through enforcement, though I am sure there is some, but by design. Brilliant!

But, BUT.....Amsterdam has so much more space than us!


Of course you wouldn't get segegated cycle space on these streets, and there are many in Scotland that would be in a similar situation. Amsterdam shows that you don't need to. Where space is tight....make it tighter!

My video does of course show examples of lovely segregated lanes, and yes they were absolutely wonderful to cycle on. (Note the lack of potholes as well....). But they only exist where space is available, or where space has been taken away from cars. Each street, has it's own optimum design. Of course, all is not perfect yet, and even in Amsterdam it's still a work in progress. In the video above there are certainly examples of door zone cycle lanes, and inappropriately placed bollards. But how I dream of having just these problems!

On our visit though we weren't happy to just look at the standard issue cycle infrastructure. We wanted to see something grand, so we went to the Nescio bridge. There is a good article here on it. It is 163.5 metres of cycling and walking glory that also affords you some wonderful views of the ships passing underneath (each of which always had a car on board!).

However, we, myself and the BBC, faced some criticism for having the Nescio bridge in the article at all. The suggestions is that the focus on shining gleaming, big spend infrastructure projects is counter-productive and would put politicians off spending money on cycling, criticisms which are entirely reasonable and understandable. However, I still think that the inclusion of the Nescio bridge was entirely necessary. 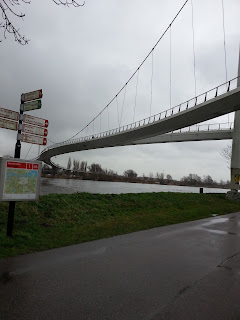 Anyone who follows government transport policy in Scotland knows that the current government has a love affair with big money spends. They love to spend money on 'showcase' projects that will leave a 'lasting legacy' for 'generations to come'. Take the hugely costly, and (many would argue) entirely unnecessary new Forth road bridge, or the incredibly costly plans to upgrade the A9 (safety measures could be implemented at a fraction of the cost of a full dualling). Even Keith Brown in the the Newsnight article eluded to this fact when he declared his vision for a modern Scotland was to build more motorways!

Politicians like big projects because they can look back at the end of their political careers and say...I did that.

Now I know for a fact that many who read this blog will not need to be convinced that there is no greater potential transport legacy than to deliver safe roads for everyone in Scotland by investing in cycle infrastructure. The money spend on a road bridge over the Forth would completely transform Scotland in so many positive ways. The politicians don't see it that way unfortunately. Cycle lanes just aren't......sexy.


Keith Brown: Mmmm.... Invest in cycling? There would be lots of cycle paths everywhere....lots of people keeping active.....lots less pollution.....lots less congestion.......lots less obesity and related illnessess.........but where can I cut the ribbon?!

Well, we can give you plenty of ribbons if that is what you really want Mr Brown. We can build a Nescio bridge or 20 and still have a huge amount of change left over from a Forth road crossing to invest in lots of cycle lanes that will get people young and old from where they are to where they want to go.

Number of Nescio bridges per Forth road crossing = 230

You can do big impressive cycling projects in cycling but it will still be a fraction of the cost of the big car/bus/train/HGV projects.

The Nescio bridge is also very interesting for another reason. There are often complaints that we don't have the expertise in the UK to design decent quality cycle infrastructure. If we don't have the expertise, how are we ever going to deliver on the vision/target? The Nescio bridge demonstrates quite clearly that this is not true. It was designed by a London based architect. We can do it if the vision is there!

So we did a bit of filming, got colder and wetter, and eventually headed back into the centre of Amsterdam for my final interview by the incredibly impressive bike parking outside the main train station. Imagine this outside Central Station in Glasgow! 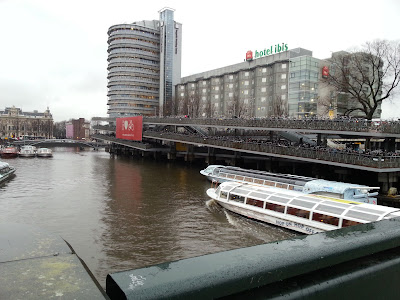 And that was that!

It had been a whirlwind of a day, and before I knew it, it was over. Time to have a bite to eat, to head to the airport and to come back to the sad reality that is cycling in Scotland. I came back wanting to go back and see more. I also came back determined to take my family to Amsterdam at some point in the future. I am desperate to show my children what a truly modern Scotland could....no....will look like.

I could have come back depressed about the mountain we have to climb, but I didn't. I came back inspired.


It might take some time, and we might be a long. LONG way of 60% modal share of cycling in our cities, but with your help, we will make Scotland a cycle friendly nation.
Posted by magnatom at 20:56