Please Note: This is not a rigorous statistical analysis!

I've written before about safety. Not only real risk, but perceived risk as well. However, today Transport Scotland released detailed figures for road casualties and headlines followed suggesting that our roads are getting safer.

They are getting safer, so long as you drive a car.

In fact the increase in safety is quite impressive. The numbers killed have dropped 11% in a year and the numbers seriously injured have dropped by 5%. That's excellent news and should be applauded. However, delve a little deeper into the report and a worrying trend becomes apparent. Whilst a new dawn of safe driving is almost upon us, that is not the case for cyclists.In fact this year there was an increase in cycling deaths and casualties. Overall there was an increase of 6% since last year.

I decided to have a quick play with the figures which can be found here. I was particularly interested in the urban figures, as that is where most people do their cycle commuting and where there is the highest density of car/cyclist interactions. So what happens if you compared the number of car occupant casualties and deaths with cyclists casualties and deaths over the period of 2001 - 2011? What relationship do you get?

So I plugged the figures into Excel and did a bit of trendline fitting. Here is what I got. 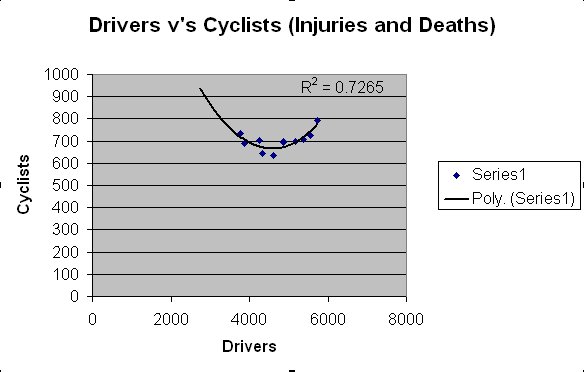 Of course this year could have been a fluke year, and perhaps if we took this years data out of the graph things will improve. 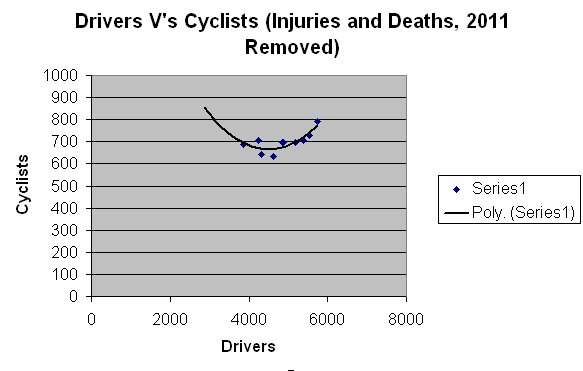 It improves a little, but not much.

So are we saving lives at the expense of cyclists lives? Of course, it's not that simple. You need to look at rates of cycling and rates of driving to see if relatively cycling is getting safer or more dangerous. It could just be that there are more cyclists on the roads this year than there were last year, meaning exposure is greater. However, the very fact that there are more cyclists (possibly 2% instead of 1%) means that we should act now before the predictions of the above graphs become true (and they are of course just rough predictions).

The government wants more cyclists. 10% by 2020 is the governments own target. So at the very least there will be 5 times more cyclists on the roads if the target is met. Now look back at the graphs and imagine that we start extrapolating a little further towards 2020 and to 10% of cyclists.Also imagine that the government has continued on the path it is on now with tiny amounts of funding spent on bits of infrastructure here and there. No plan. No real funding.

If we want that 10% of trips by cycling, and if we want it as safe as it can be, then we need to start investing and investing significantly. Not next year, not in 5 years time, but now.

If you haven't already, please, PLEASE contact your MSP's and tell them that the time is now for a step change in funding.
Posted by magnatom at 20:44