I haven't written a blog for a while, as I have been living my online life via Twitter most of the time. However, this particular issue required more than a Twitter thread, so the blog re-awakens...
If you follow me on Twitter you will be aware that back in 2019 I was assaulted whilst cycling to work. You will also be aware that the driver who assaulted me was only given a warning. Further to that I was then given a section 38 warning (effectively a warning for breach of the peace) for the same incident. My warning was given for swearing after I had been driven at, abused and then punched.
If you don't follow me on Twitter, or you need a recap, then this article by Cycling UK Scotland (who helped me through the ordeal) should bring you up to speed. A direct link to the video in question is also below.
As discussed in the article this incident has sparked a Cycling UK Scotland campaign to improve policing specifically around road violence and the use of camera footage. However, this post is not discussing that campaign. This post discusses my formal complaint to the police.

As part of the formal complaint process Police Scotland assigned an Inspector from a different part of the police force to help me pull together the formal compliant. During that process, which was conducted very professionally by the officer, we produced a document that went to the police complaints team. There were actually five separate complaints contained within that document. They were as follows:
These complaints along with details relating to each complaint were submitted in February. I was told that an outcome could take several months due to the need to take statements from those involved. However, I was surprised to recently receive an outcome less than one month later.
Below is the response letter with names and identifying details removed. I've blanked out officer names with colours which always correspond to the same officer. Apologies if you cannot make out the difference in colours, but I couldn't think of any other simple way to do it, and it should be obvious who is who. Please click on each picture to zoom in. 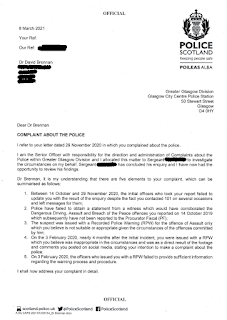 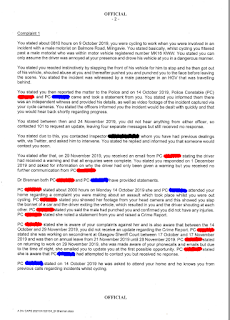 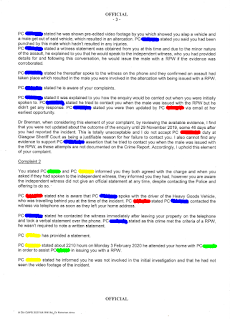 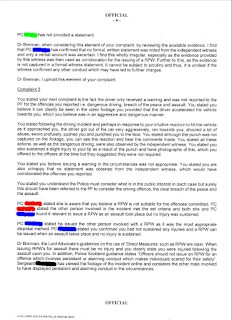 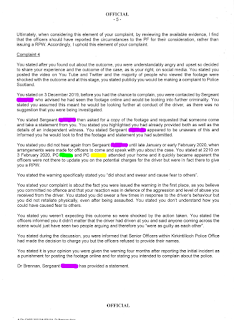 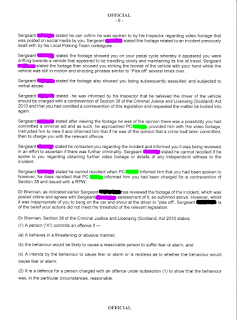 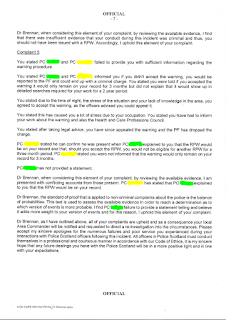 In summary, all five of my complaints were upheld and the Area Commander will be tasked with investigating further.
There were some areas that are worth highlighting.

I remember very clearly the day the officers came to speak to me and I also remember very clearly pointing out that I had an injury from the assault. By the time the officers had come the swelling from the injury had mostly settled down and the bruising subsided. I remember mentioning that it was only a slight injury, and that I've had worse, but I had pictures (see below for a picture I took when I arrived at work). I remember one of them saying that they didn't need any photos.
That injury, however slight was reason enough that the driver should not just have been given a warning. That in itself meant that the charge should have been sent to the Procurator Fiscal for further consideration. It wasn't.

No independent witness statement was collected. Whilst the witness was initially contacted over the phone (and apparently backed up my version of events fully), the police never followed up to collect a statement. The witness actually tried to contact the police to do so, but was never called back.
The officer investigating my complaint suggests that this was 'wholly irregular, especially as the evidence provided by this witness was then used for the issuing of the RPW (warning)'.
Why was no witness statement collected?

As the officer investigating my complaints points out, not only should injury prevent the police from giving a warning only, but in cases where there is 'persistent or alarming conduct which makes individuals scared for their safety' then a warning isn't sufficient.
It is abundantly clear to anyone watching the footage that this individual was clearly persistent. It starts with him driving his car at me, then coming out of his car, being abusive, pushing several times, punching, walking away, and then coming back to abuse me more. He even mentions something about having issues with me before (not to my knowledge). Very clearly persistent.
As for 'alarming', well, I don't even think I need to say anything in that regard. His actions in this incident were very clearly alarming not only in the legal sense, but in any sense.

With regards to the driver being warned we effectively have three major failings. The police ignored my injury, didn't bother to take a police witness statement and chose to ignore the obvious persistent and alarming conduct. It is pretty clear then that the police did not investigate the driver properly or with any significant effort. This is interesting especially considering the effort that then went into investigating me...

The police confirmed in their statements for this complaint that my conduct during this incident was only considered an issue AFTER I had posted my video online and AFTER I had publicly complained about the driver's warning. (It turns out I was correct to complain!) However, that wasn't considered by the unnamed Inspector. Instead that unnamed Inspector did consider that my conduct contravened section 38 of the Criminal and Justice Licensing Scotland Act 2010.
The Inspector had a chat with a Sergeant. This was the Sergeant that contacted me to say that he was looking into 'further criminality'.  This Sergeant states in his statement that he thought there was a  'possibility' that I'd committed a criminal act and so asked a PC to investigate. The decision on whether to charge or not was left to the PC. It is, then, particular interesting in this case is that this particular PC has failed to provide a statement (is that even allowed?!). Did that PC really make the final decision? Did he really have any say in the decision? Why did he not follow up with the independent witness?
Its important to note that no complaint was received from a member of the public about my conduct during this incident. An Inspector viewed the footage online. Perhaps that Inspector follows me on Twitter? Perhaps a colleague pointed out the footage to him or her. We can't be sure how they came across it, but it is important to note that at that time I had NOT contacted the police and no-one else had contacted the police to complain about me (that I am aware of).
The Inspector having viewed the video online would also have seen all the comments surrounding it, the vast majority who were shocked by the drivers conduct. I can only find one comment suggesting I should have been charged with something, and they suggest vandalism!
The officer investigating my complaint agrees that the Sergeant made the right assessment (that is that a crime 'may have been committed'). That is fair enough, as I did swear loudly, though very mildly! So yes, it may have been committed, until you actually consider the facts. However, as pointed out in the complaint investigation, my conduct did not meet the threshold of the relevant legislation. Why? I guess for three reasons. Firstly, I quite clearly did not intend to create fear and alarm as I was just reacting instinctively to events. Secondly, it is a defence that the person charged, i.e. me, behaved in a way that was reasonable in those particular circumstances... For example, shouting mild profanities having been driven at, abused and assaulted! Finally, had they actually spoken to the independent witness, they would have learned that they did not think I caused any fear or alarm!
So it seems there was no reasonable legal basis to give me a police warning, yet it would appear that an unnamed Inspector, spotting some footage online where I complain about the police response to an incident, did. Oh and one police officer in the centre of this is not willing to provide a statement. Oh, oh, oh and the Inspector hasn't even been asked for a statement, which is the one thing that the complaint procedure seems to have avoided. Why? It certainly would have been interesting to hear what he/she had to say.

Overall, I think it was pretty clear that I was messed around by the police from start to finish (although the complaint's process itself was very smooth). Why I was messed around in this way, be it incompetence, malice, or something else, remains a mystery. Whilst it certainly could be argued that some of the issues were created by incompetence, to me, and this is of course just my opinion, it feels like I was targeted. How, looking at the footage, taking into account witness account, (which was absolutely offered at every stage, but ignored), considering that I was the victim, and taking into account the legalities I was considered guilty of a Section 38 offence, beggars belief.
I do though feel some form of vindication in this. It has been a long, and at times, very stressful process which has clearly highlighted many of the failings of the system. It really is weighted against the protection of vulnerable road users, even without these specific failings. This is why I feel the campaign with Cycling UK Scotland is important (please sign their petition!!).
In the end, it all comes down to trust and having been through this experience I find it very, very hard to trust the police with any incident I report. Yes, the complaint finished with some nice words, and a promise to do better, but without changes to the system, I and you will always be at the mercy of the current system, which is evidently broken. That's why it is time to fix it.
Will I hear anything back about the Area Commander's investigation? I suspect not, at least not without me chasing it up, perhaps with Freedom of Information requests or similar. Will anything change? We'll see.