The Mind of an Anti Bearsway Councillor

As you'll have seen in one of my previous blogs, I wrote a letter to my local SNP councillor Anne McNair, who voted against the Bears Way extension. Unfortunately, despite me chasing via e-mail and on Twitter (local SNP group Twitter). I never did receive a reply. So yesterday, seeing that Anne had a surgery 10 minutes walk from my house, I went along for a chat.

My 11 year old son came along, mainly as he wanted to hear why the lane wasn't being extended. Here is a summary of what happened. I should add, that twice during the meeting I stressed that if Anne wanted to say anything off record, that I'd be happy to keep those comments confidential. She didn't take me up on that.

First off, let me state quite clearly, Anne was very nice, was very willing to listen and whilst she did dodge a few questions a wee bit, she was generally quite candid. She gave me about 50 minutes of her time. I thank her for that.

I was though, pretty dismayed by the end of the meeting.

First off I explained who I was and the fact that I had tried to contact her on a few occasions without any reply. Anne explained that Cllr Ian MacKay had put together a that was supposed to have been sent to everybody. I certainly hadn't received that, and Anne was surprised. No matter if this was true or not, my letter did not ask generic questions. I wanted to know why Anne had voted against it, not everyone else.

The first interesting fact that I heard, regarded some comments from Jim Gibbons. After the vote he had e-mailed people suggesting that there would be congestion at Boclair (despite modelling suggesting otherwise), if the lane went in. Interestingly the SNP group apparently 'gave him a row' over that e-mail.

The next interesting thing was that she didn't realise that Keith Small was suggesting that segregated cycle lanes in general were not the way forward. Anne seemed to think he was only talking about the A81. From his comments, and a meeting a friend of mine has had with him recently confirms he is opposed to them completely. Anne looked a little uncomfortable at this.

It was then decided to ask a difficult question. Were you pressured to vote as a political group on this?

The answer was very interesting. Anne pointed out that voting in a group was normal practice. Normally the SNP was outnumbered by a coalition of the other groups, which the SNP couldn't stop. Only on planning, were councillors expected to vote individually, apparently. This I found very surprising. Councillors are individuals I thought...

I then pointed out that Cllr Cummings (Ind) just before the vote, stood up and confirmed that this would be a free vote. Everyone murmered in agreement and someone, not sure who, said that this was always the case.

Obviously it wasn't. Anne, did not remember Cllr Cummings comment.

Anne then pulled out her mobile phone, whilst I was talking. She was showing me a picture of one of the chicanes in the lane at one of the bus stops. At this moment, I knew where she was going.

We got into a discussion about why it had been designed the way it did. I pointed out that the bus stops could have been designed better, but remedial work had been planned (now stopped). I discussed some of the internal battles that went on within the council between departments (I've very good sources for this) and that the design is always going to be limited in scope in the current climate due to limited funding....

But a lot of cyclists don't use it!

I must admit this surprised me. I'd heard this line being used before, but I didn't expect it from Anne. I pointed out that surveys have shown that 92% of cyclists do use it. Actually, a very large number considering the fact that Anne thinks the design is terrible.

We talked about off road, and I pointed out that cyclists are people and want to go where people want to go. That is down the main routes. They are main routes for a reason! I also asked how people would get to the off road routes.. Anne didn't answer.

At this point someone popped their head in to the room and Anne had to pop out for 5 minutes, At that point I looked at my phone. That is when I saw the following Facebook reply to a news item about our advocacy ride. 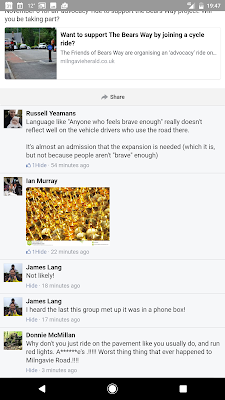 When Anne came back in I showed her this, and I mentioned that these are the sort of images that the SNP are unintentionally aligning to.

Why did you personally vote against the scheme?... This was Anne's answer..

They messed up phase 1, which was the easy bit, and you've got cyclists using the main carriageway. That tells me there is a design fault. Phase 2 has harder junctions and I'm not convinced by what I've seen in phase 1 that phase 2 will be designed right.

I then asked the following...

Why then did you vote against it now, when we have only seen preliminary designs? If you are concerned about the design of phase 2, why not let it go to the detailed design stage where you can actually see the design, and vote on that!?

I actually asked Anne this question in two slightly different ways, and both times, she screwed her face up a bit, and shrugged. She didn't have an answer.

After the second occasion I added...

Can you see why we are frustrated....?

I then finished off by saying that I feel the decision was ridiculous, especially considering the benefits that cycling would have on pollution, congestion, health, etc. I also pointed out that the decision had ramifications far beyond East Dunbartonshire and that many from outside the area were watching closely.

We stood up, shook hands and I took a slightly bored and tired 11 year old home, unfortunately not really having moved forward very much. I had to do it, I had to understand why a councillor who was actually pro-cycling in the past, had voted against Bears Way.

We are now left with a path that starts and goes no-where, a section of a community that is angry enough to suggest placing tacks on a path where families are going to cycle, and a number of councillors who I believe, and this is my personal opinion, voted for the benefit of themselves rather than the area and people they represent.

I'm not sure my son will value the word of politicians from now on. I think he is right.
Posted by magnatom at 09:28