A Letter About My Family

Here is an e-mail I've just sent to a local company. I'll let the letter do the talking.
Dear Brian,

Apologies for the long e-mail, but please bear with me.

I am a father, and as fathers sometimes do, I like taking my children on bike rides. I am fortunate in that my two oldest, D 10 and M 8, are very keen on cycling. On Saturday morning the weather was clement and thus I decided to take my two boys on a bike ride along the canal close to where I live. We live in Torrance.

Unfortunately the canal is not right next to our house. In fact we need to cycle a relatively short distance to get to it. There are two routes that we can take, one that requires us to on the path and then via some dirt cycle path, or via the road. On the way out we went the path way and had no problems in doing so.

After a while out on the bikes my two boys decided they wanted to return home, but they suggested to me that they wanted to come back the other way. They wanted to do this for two reasons, firstly because there is a relatively fast hill to come down, they enjoy the feeling of speed on their bikes, but secondly because they are keen to learn how to ride on the roads, just like their dad. You see, I am a cyclist who commutes by bike daily to my work at the Southern General Hospital, which is a round trip of about 24 miles a day, a commute I have been doing for a number of years. I have quite a considerable amount of experience cycling on the roads.

I am of course, not a fool. The roads are a difficult environment for a cyclist to be, especially the roads around Torrance. I have suffered my fair share of bad driving when out cycling. However, I also know how to keep my kids safe. I know the techniques for riding in a small group such as this and I know that my children are capable of it. Thus I agreed with M  and D that we would ride the alternative route of which 0.9 miles was on the road.

The first 0.5 miles on Torrance Road were uneventful. The road was relatively quiet and for a large part downhill, and when cars did come from behind us they passed with great care and gave us plenty of room. It was only after we joined Balmore Road for the last 0.4 miles that we noticed an issue.

D and M were ahead of me, I was behind and taking a strong position in the lane. This discourages close passes, especially on my children. We were cycling at the speed of my youngest which was probably about 10mph along this road. Yes it was quite slow, but it would not take us long to get to the turn onto Tower Road and to get out of the way of the following cars. A few vehicles did appear behind us, and unfortunately at first as the road was busy coming the other way, it was not safe to pass. A short distance further and I heard the first toot of a horn. I say toot, but it was angrier than that. It wasn't from the driver behind us, who was being patient, but appeared to come from the driver behind. This was an early indication to me that trouble was brewing.

Cycling with my children in this way means I need to keep communicating with them. "a bit further right M", "move a bit closer to your brother D", etc. So knowing that there could be an issue shortly I checked they were in the correct road positions. At this point my youngest, who was at the front said, "should I indicate yet". I suggested that it was too early. Then an opportunity arose for the first car behind to overtake. They did so without a problem. Then the second car, which turned out to be a grey van overtook. Their passenger window was down.

I have no idea exactly what was shouted by the two occupants of the vehicle, but I can assure you it was abusive, threatening and horrible for my kids to hear and be subjected to. I was understandably furious. Perhaps I shouldn't of done, but I waved for the driver to pull over. I did this mainly because I wanted to get a good look at their faces, so if I had managed to get enough details I could take this horrible incident to the police. They drove on.

The next two cars again passed without incident. At this point we were getting closer to the junction and my son had asked if he could signal yet. As he asked another car overtook and again we had horrible abuse shouted at us, for what I can only assume was the short hold up. At this point, feeling very flustered and concerned for the state of mind of my children and their safety I said "yes indicate", and he, I and D all did so. This was of course earlier than I would indicate if I was riding myself. However, I had two flustered children and an understandably flustered 'me', to get safely to the right hand turn and off the road that had very quickly turned hostile.

If you can understand everything that I have written above, I hope you will understand that I was angry with your driver, who stopped just along the road from my own house. As I passed I indicated (and I at no time swore, which amazed me) that that was a terrible maneuver which had put me and my children especially in danger. His answer was that it was me that was dangerous and me that was putting my children in danger.

I took my kids back to the house and returned to speak to the driver. My intent was only to get his name. He refused to provide me with his name. He and I went on to discuss the incident. The driver agreed that he had overtook after I had signaled but suggested that he had done so as I "had been waving my arms around" and riding dangerously. Yes, I had perhaps been waving my arms around, but that was at the drivers who were abusing my children and also in an attempt to try and control my children. I was pointing to where they should ride at a stressful time.

What the driver repeated a number of times was that he thought I was dangerous. We eventually got to the bottom of that when he clarified that it was 'dangerous of me to take kids on the road' and that 'he would never do that'. Effectively he was suggesting I was a bad parent. At this point, I asked for his name once more. I was refused and so I took his picture (attached).

So am I a bad parent? Does the fact that your driver thinking that I am a bad parent excuse his overtake? If I was indeed waving my arms around and cycling dangerously, is that a good time to overtake? Should you perhaps wait behind?

We live in a world that values the motor vehicle above all else, and I say that as someone who owns and drives one. Delay of any kind is unacceptable. Drivers, not all of course, but a significant proportion, will endanger you or abuse you if they feel that their delay has justified it. On this occasion two drivers felt that a short delay justified abuse towards me and my children and one driver, your employee, couldn't be bothered waiting a few seconds to allow a father and his two boys to safely get out of that abusive situation.

Might I ask that you pass this message on to the driver and let me know what his response to it is. It may also be worth pointing out that I am one of the organisers of a campaign called Pedal on Parliament. This is a campaign that is pushing for the government to invest in proper cycle infrastructure to make the roads safe for all. This would include where appropriate segregated cycle infrastructure that would keep the majority of those 'pesky cyclists' out of the obviously much more important car drivers ways. I suspect though that this particular road would not suit such segregated infrastructure and despite my best efforts it might still be the case that me and my children might hold up your driver for a few seconds.

Perhaps next time he would chose to wait a few seconds instead. is that a lot to ask? 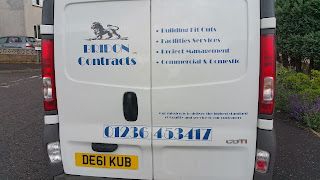 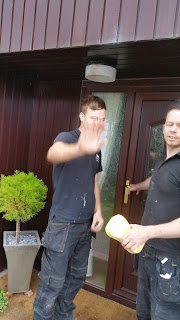