I May Be Wrong About Glasgow...

You'll have no doubt read my two previous blogs (here and here) on the very disappointing approach to cycling that Glasgow council has. In a nutshell, they will not commit to future spending on cycling. I will soon post a more detailed blog on the meeting we had, as there is more to tell. However, in the mean time, GCC and Frank have released details of a new cycling initiative in the city.

What?!? They are actually doing something positive for cycling.....

You can read about this 'initiative' here.

Oh dear. It's a wee online thingy where you get to play the part of a road user (you can chose to be a bus driver...cool....), you get to watch some videos and you have to answer some multiple choice questions about what a good driver/cyclist, like yourself of course, would do.

Yes, you've guessed it, I'm not entirely enamoured with this idea. In fact, I'd go as far to describe it by its correct technical term....an utterly useless piece of fluff. Yes, this is a total and utter waste of time. However, I'm a scientist by trade, so I thought I'd do a wee experiment. I thought I'd give it a go. You can try it for yourself here.

Well, actually.....it's not. The reality is it is mind numbingly boring, and after two or three scenarios you really do start to get irritated with the narrators slightly condescending tone. However, I persevered and managed to play the part of a cyclist, a HGV driver and a bus driver. I gave up after that. I just couldn't take any more.

I should probably state for the record that I got all the questions right...that was until I started getting bored and I started beeping my horn at those highly florescent cyclists!! Grrr...

So what did I learn? Well, umm, err, nothing really. OK I suppose that being a cycle safety campaigner, I should be expected to know all this stuff (I'm not perfect of course!). However, I'd be really surprised if anyone would learn anything. Yes you do get told that beeping your horn at cyclists to tell them to get out your way is wrong, but if we are all honest, we all know that, including the people who do it. They generally know it is wrong, but that doesn't stop them. They do it anyway because it makes them feel a bit better.

That showed that dam cyclist!!! Ooh, maybe I shouldn't have done it.....tee hee.

So I'd like to hazard a guess that this 'initiative'  (I'm using inverted commas because there was no initiative shown in developing this), will have absolutely zero effect on my, or any other cyclists road safety. I say this with authority because:

Hold the bus! Some of the advice is downright dangerous?!?!

Yes. One particular situation aimed at HGV drivers and bus drivers is totally wrong. Have a look at scenario 4 in both the bus and HGV section.

You're on a tight twisty country road, a cyclist is a ahead. What do you do?

The 'correct' answer that the site provides is:

Slow down and wait for a sufficient gap to allow at least one arms length between you and the cyclist and then overtake. 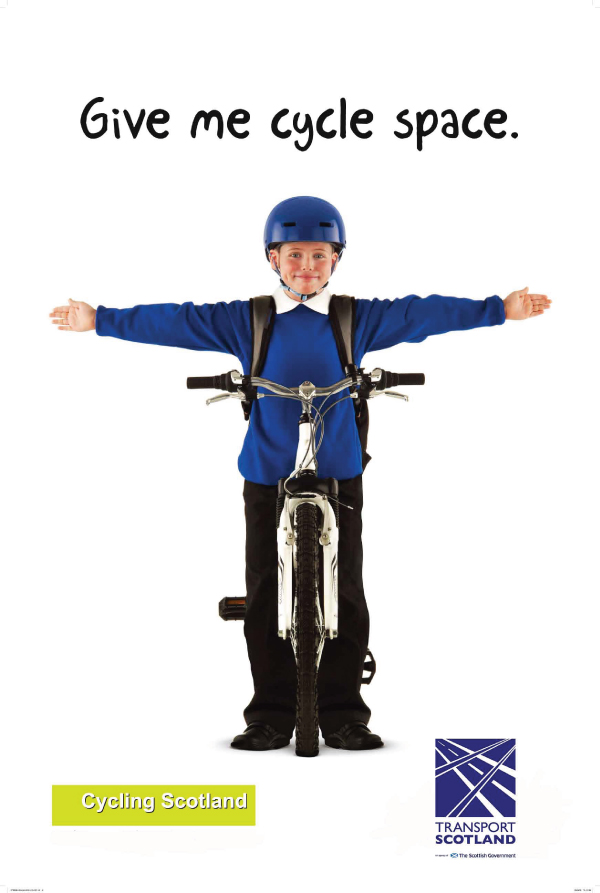 My arm (and yes I did get a ruler out) is about 68cm long. My arms are probably not the 'arms length gold standard' though. In fact, I suspect that there isn't a gold standard for arms length. The young chap above might only have arms about 50cm. Who knows. Anyway, let's assume my arms are the right length...


So this advice boils down to.....when there is enough room to pass the cyclist within touching distance, then go for it matey. You'll be fine. The cyclist won't mind at all being passed that close. In fact, advanced cyclists might even grab on to your vehicle and get a well earned tow. Well done driver, you're not just being nice to cyclists, you are dragging them along as well....

So not only is this thing not going to be watched by anyone that matters, in the slight off chance that a bus or HGV driver does watch it, he will feel justified in passing me less than the 3ft absolute minimum that just about everyone else in the entire universe accepts is....the absolute minimum!!

Ooh, I could nit pick a few other wee bits and bobs as well, including the fact that it mentions 'right of way' a few times......perhaps they meant priority.....the fact that the HGVs and buses are often far too close to the cyclists in front, that the video suggests that cycling on the path endangers pedestrians (and yet Glasgow insists on giving us shared use paths), that in one video a car runs a red light (it stops about 2 metres past the stop line), that the only cycle infrastructure seen are ASLs which are crap (and the video in a few places points this out, i.e. don't use them) or painted cycle lanes (far too narrow and very poor surface) and that an HGV is driving in a bus lane.......

So the bottom line is that Glasgow will not commit to doing anything that WILL actually make cyclists lives safer, by investing in properly designed, properly connect and properly funded cycle infrastructure as confirmed at my meeting earlier this week, but they will invest money into fluff, that is not only fluff, but that contains some dangerous information?

Not only have Glasgow released this fluff, they have actually won an award. Not just any award but.....and this is worth the wait, reading to the end of this blog....


Glasgow City Council has won its second award in four months for its achievements in cycling and sustainable transport.

Yup! Glasgow has been awarded for excellence in developing cycle infrastructure!

Ok, so they won the award for a scheme in which they didn't actually invest any money, but don't let that spoil the party. It's official. Glasgow is Miles Better when it comes to cycling.