Sorry. It's been a while, but we've all been a little busy up here in Scotlandshire recently. Normal service resuming.....

Yes, there are bridge repairs ongoing on my commute to work which have resulted in a section of road where 4 lanes have been reduced to two. The roadworks are here 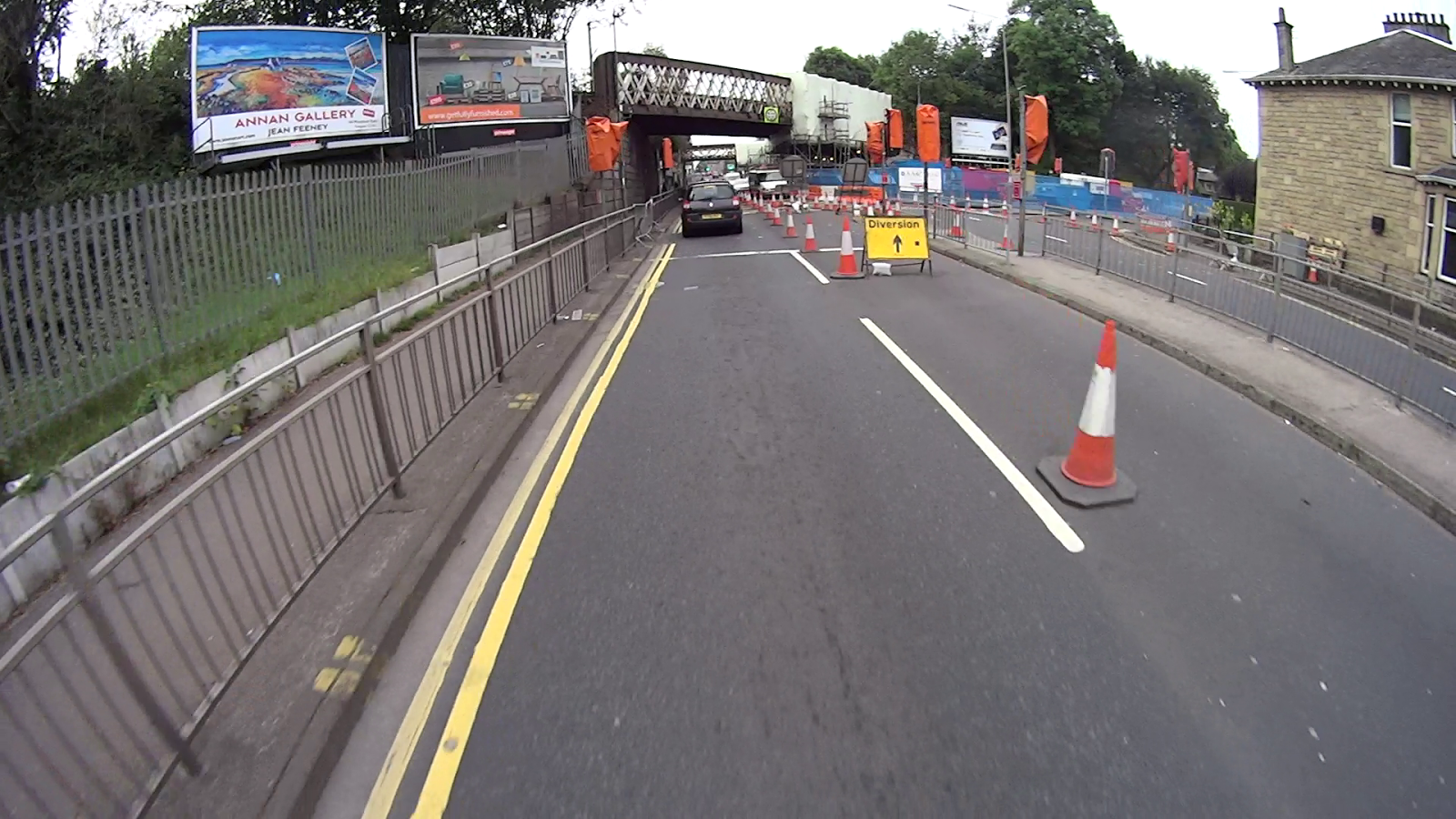 You can see that there are two railway bridges and it just so happens that a decision was made to repair them both at the same time, which is an unusually good idea. What didn't seem like such a good idea was that the work was to begin just after the Commonwealth Games and just as the schools were returning. Oh dear.

Anyone who recognises this road from my videos will know that it is very often choca-block with cars.

At rush hour it is not unusual to see a mile of tailback traffic leading up to this area which can when things are particularly bad (often for no obvious reason) tailback about 3 miles. So when I learned that this work was starting, and when I learned that the work would be carried out over 18 weeks, one thought came to mind.....

I predicted that I would be filtering through 3 or possibly 4 miles of traffic for 18 weeks. Joy.

After the first day of the road works when the traffic was indeed heavy I posted the following tweet:


Roadworks have started on Glasgow's Crow Road reducing 4 lanes down to 2 at Jordanhill. Lasting 18 weeks. Lots of filtering for me.....
— David Brennan (@magnatom) August 11, 2014

In fact, another local Tweeter replied agreeing with me:


@magnatom @ScotstounWoodie works to rail bridge and it's Armageddon so recommend you avoid until after Xmas
— Woodend Bowling Club (@WoodendBC) August 11, 2014

We were both completely wrong. We couldn't have been more wrong.

Yes, on that first day traffic was heavy. Not exceptionally heavy, but that wasn't surprising as the schools weren't back yet. However, after that, and it is still the case with the roadworks ongoing, I had never seen the traffic flow more freely. Not only did 'Carmageddon' not come to pass, but the standard tailbacks disappeared. At worst the traffic has only tailed back as far as Anniesland Cross, and even there it flows.

It's true, and I'm not the only one to notice it. My wife who regularly drives down that road (a little earlier than I cycle it) says she has never seen the traffic flow so freely. Others that I know who travel down this road say exactly the same.

So what is going on?!

How can a road lose two lanes and flow more freely?

Now I'm no traffic engineer or urban planner, but I've been making  a few observations and this is what I've noticed.

The works haven't just closed off two lanes on Crow Road, they have also closed the junction at traffic light controlled junction at Southbrae Drive (you can see it in the map above just north of the two railway bridges. There has also been a slight change in the light phases at the junction Abbey Drive/Crow Road (to the south).


The junction closure and the phase changes have effectively allowed traffic to pass through an area that usually acts as a bottleneck. Traffic rather than being stopped every so often, flowing through without serious interruption. Yes, there is an overall reduction in flow rate, when the traffic is flowing, but it is following at the slower rate for longer.

Of course, there are possibly other factors affecting the volume of traffic. It is entirely possible that drivers know the roadworks are there and are taking alternative routes, although I've not noticed or heard of any knock on congestion (even where the junction closure has forced alternate routes). It is also possible that some drivers are taking alternative forms of transport.....God forbid...perhaps even cycling! Of course if they are, then this is a benefit.

Perhaps traffic is generally quieter due to other factors. The weather perhaps (it's been quiet on very wet days as well). Maybe lots of people have moved out of the area at once, though I suspect this is a tad unlikely!

Perhaps though, and surprisingly I think this is the most likely, the closed junction and the changed traffic lights priorities demonstrate that this road could be re-engineered to reduce the number of car lanes without having devastating effects on travel times.

OK! I'll admit this is a simplistic analysis. It's a bit different converting 3 miles of dual carriageway to single carriageway, compared to just reducing a small section to single carriageway. There would be other knock on effects. What this experiment does demonstrate though is that with a bit of thought, a bit of planning and a bit of give and take, more space can be found even on the busiest of roads for.........yes you've guessed it...... cycling.

Imagine just taking one lane away from the four on this road. Imaging putting in a segregated route all the way along this route. Imagine if the traffic was managed in such a way to keep it flowing. Imagine the amount of people on this route that, seeing a safe and easy to use cycle lane, might actually decide.....hmm.....  I might just take the bike today.

On this occasion, the road closures were forced upon us. Yet, the predicted chaos never materialised. Imagine if the politicians had the vision to try it for real and to make the roads safer for alternative forms of transport at the same time. Perhaps it would start a revolution.....