You may have noticed I've been a bit quiet recently. It wasn't intentional, but sometimes you need to take a break from it all. That's not to say I didn't intend to write some blogs, I did. In fact I have about three blogs all partially drafted, but none of them ever got finished. I think the energy was lacking.

Energy is always a bit short when the majority of what you have to write about isn't positive. Oh sure, there are those that suggest we should be more thankful and more positive, but when more cyclists are dying, and every cyclist (and person who would cycle but doesn't feel safe enough to do so) I chat to is feeling generally negative about the lack of investment, then it is hard to see things in a positive light.

That's not to say everything is bad.

In fact yesterday I had one of my most enjoyable experiences on a bike......EVER! Ok, I'm cheating a little, as this cycling wasn't on the roads, in fact it wasn't even outside. It was in:

Yes, I had my first ever go at cycling in a velodrome....oh and what a velodrome! With banking that has an angle of 44 degrees, it's one of the harder velodromes to ride on....at least that's what the instructor told us, reassuringly at the start! 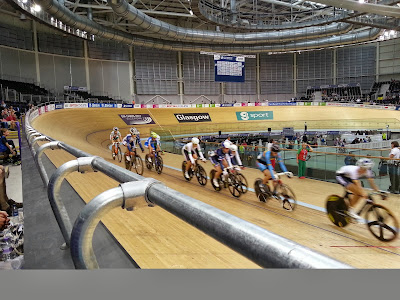 Would I make it around without falling off? Would I get up on the curve banking? Will I be at Rio in the British team?

I arrived nice and early having cycled from my work to the velodrome. I think I was the only one to cycle there for that session. Whilst this made me feel a little virtuous, it did mean my legs weren't quite as fresh as the others. Oh well, at least I had the right kit on from the start.

Upon reaching the desk to pick up the equipment the employees first question was, does that come off? Unfortunately he was talking about my helmet camera. I wasn't allowed to have it on whilst cycling on the track. There went my chance of YouTube fame as I came crashing down the track! After wiping away my tears of disappointment, I was given a pair of shoes (I have the wrong cleats), and a track bike.

Track bike?! Eek! Having never ridden a fixed gear bike before, and having heard horror stories about what happens if you stop peddling on a bike that you can't freewheel on, I was a little concerned about how I would get on. Still, nothing ventured nothing gained!

Having got there early it meant I had a chance to chat to one of the other riders. Yes, I made sure I told him about Pedal on Parliament, and who knows he may even end up reading my blog, so...hi John if you are reading! He was in a similar situation to myself, being a pretty experienced road cyclists, but not having ridden a velodrome before. In fact, no-one in the class had done this before. We were all in the same boat....ummm I mean velodrome.

Then the call comes to enter the track. Up we all waddled (we have cleated shoes on after all) and line up next to the barrier standing next to our bikes. The instructor (very nice chap) talks us through what is going to happen, what to expect and what the bikes and the track are like. Then it is time to mount the bikes. Most of us have used clip-less pedals before so it isn't long before we are all ready to go.

Mind you....I thought the banking looked steep when I came to watch track cycling as a spectator.....it looks even steeper when you are considering cycling around it!

So off we go. First we cycle around the 'apron' of the track, the flat part near the centre. This is the important 'get used to the bikes time', and boy, did I need it! Having cycled free-wheel bikes all my life it came as a slight shock when I accidentally went to free-wheel and the bike and me jolted. Best not to do that at speed! I did that a few times until the legs started to let go of the normal free-wheel impulse and settled down into the rhythm.

Then we progressed onto the 'Cote D'Azur' the light blue strip at the bottom of the slope. The slope is gentle here (probably like the breeze in Cote D'Azure) and this didn't feel too bad now that I was getting used to the bike. Everyone in the group (14 of us) were coping fine with this. You could sense that some of us wanted to go faster than others, but the no overtaking rule kept us all in check.

OK folks, start going up the banking on the straights.

And so we did, all filtering past the instructor as he slowly edged further and further up the slope of the track. This wasn't too bad, so long as you had a bit of speed, and we did all start speeding up a little, making sure we were looking back when we should.

This is where it got interesting....

Right, now we will try and stay between the red and black lines all the way around....

This is where I started having free-wheel issues again. Every time I approached the curve my leg would jolt. It took me a few goes to work out why that was. For years I've learned that when you go around a corner you stop pedalling. You do this to stop your pedal from striking the ground, something that can have you off the bike in a jiffy. I was worried that I'd have a pedal strike.

Now was the real test. The no overtaking rule was removed, as were the restrictions for how high you could go on the banking. It was moment of truth time. At this point I remembered a tweet I received earlier in the day where someone pointed out that the slope angle at the black was the same as the angle at the top. Effectively getting to the top was all about belief. Did I believe I could do it?

We were split into two groups and being in the first group we were told to....push off......

After a lap or two of building speed (and courage) I started to climb the track. First the black line, then the red, then slightly higher than the red, then towards the blue........getting there.....then slightly above the blue, then onto the advertising banners (they crackle as you ride over them!) and then.......above the banners and up to the top!!!!

It's a shame no-one was filming me at this point, I had the biggest, cheesiest grin on my face as I zoomed around (it felt like I was zooming anyway). It was fab! Out of my group I was definitely the highest on that go around, though in the second group there were a few riders doing the same as me! As we had all done well, and were ahead of time, we all got another go!!!

This time, having talked to the instructor, I did some swooping off the high banks towards the lower slope of the track.....sprinting style! It was an amazing feeling swooping down and picking up speed. I can only imagine what that is like when there are other riders doing the same around you! As the session progressed though, I wasn't getting quite as high as before. My old legs were starting to tire out. It was surprisingly hard work getting up the banking each time, which is why, I suspect that a lot of the action doesn't happen up there!

Then the session came to a close and we all pulled over to the fencing to stop. No-one fell. No-one really wobbled. Not everyone made it high up the banking, but everyone made it above the black. Turned out that meant we all passed our level 1 accreditation! Who knew!?

What a fabulous evening of cycling that was, and I was still grinning as I mounted my normal bike to start the cycle (nearly all uphill) home. The strange thing was, my normal bike now felt different.....I can free-wheel again!

As I cycled past thousands of supporters (not for me, for some football game that was about to start at Parkhead, involving Barcelona I believe) there was one thought in my mind.

Damn those velodrome instructors for making me pass level 1. There's no way I can stop there now! It's full accreditation or bust!