Having had a week off work to spend time with the kids (not hard work at all, honest!), I was back at work today. This meant I was really looking forward to getting back in the saddle. The weather was dry-ish, which was good and the wind, though in my face, wasn't too stiff. Happy days.

It was in fact quite a happy ride, like most of my commutes are, except for one thing. I was bought crashing back to earth as I passed through Milngavie and spotted this.

To anyone who follows this blog or has been following the 'discussion' about the Nice Way Code this image will look familiar. Here's a better look at it. 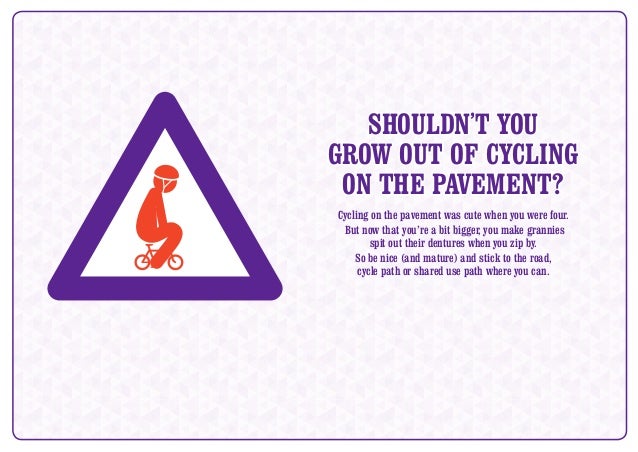 The poster has the smaller writing replaced with the Nice Way Code sign.

I am waiting for my first comment from a driver of 'shouldn't you grown out of cycling...'. That'll be nice....


But, I am not here to bash the campaign any further. It's been pretty much done to death now, so there is little mileage in that. What I am here to bash is the irony of the fact that the government is happy to invest in adverts like this when the conditions on the road are such that many people feel the need, rightly or wrongly, to cycle on the pavement.

The above picture was taken from a screenshot of my helmet camera footage. Let me rewind a few seconds and show you the poster from just a little bit further away. 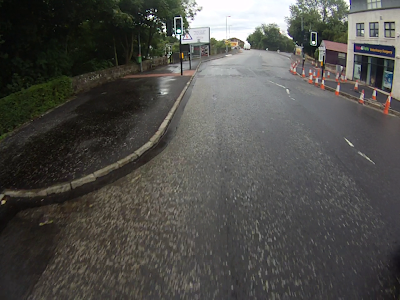 If you look carefully you can see the Nice Way Code poster in the distance. In the foreground is a pedestrian crossing and on the right of that you can see a number of traffic cones. It's the traffic coned area that is of particular interest. That's a new area of pavement that juts out from the right. The road there used to be wider, now it has been narrowed. The coned area is all new pavement. You can see what it used to look like below.

So, effectively through traffic engineering the council would use the trunk road money to improve transport infrastructure.

Actually, that is good (apart from the parking bit...). In fact I was at a meeting a number of months back in East Dunbartonshire where the council suggested that it was going to use the available money to build proper segregated cycle lanes along this route.

Yet, my eye is drawn back to my picture above.  To put this picture into context, just to the left of the picture beyond the traffic lights is Hillfoot railway station. So this is a fairly busy crossing for people coming from the station. Therefore, it is safe to assume that the narrowing is there to help pedestrians. Helping pedestrians is definitely good.

I am not a road engineer, but I strongly suspect that if you are trying to improve the road landscape for one group of vulnerable road users, you should not make it worse for another group of vunerable road users. Yet, what we have here is now a classic pinch point.

Anyone who cycles regularly on busy roads will have plenty of experience of pinch points. That is a point where the road narrows suddenly. In an ideal world these pinch points shouldn't be a problem. However, the reality is that it brings cyclists and drivers into conflict. We all know that some drivers just have to get past cyclist and some of them aren't always the best at forward planning.

Must get past cyclist.....there is enough space here to get past as they only need 50cm anyway....car starts passing...ooooh, I forgot the road narrows here......crunch.

In the direction I am facing in the above photograph it isn't quite as much of an issue, as the road is fairly narrow coming that way anyway with the newly created parking bays, however, coming the other way it is a big problem. You have to keep a very strong position coming down the hill to avoid being 'pinched'.

There are a number of important points to make here. First, why was the pinch needed? Why did the road need to be narrower? perhaps it shortens the crossing time, but why not just extend the pedestrian phase if that is an issue (oh wait that might hold up the traffic a bit...). Perhaps it is there as a traffic calming measure? This road is a 30mph road and I have to say speeding really isn't an issue here. There are a number of junctions, lights, parked cars, a petrol garage and pedestrians around that keep the speeds pretty low. Generally I can keep pace with cars on this road.

So why is it there? Who knows! Ticking boxes, perhaps?

More importantly, you might remember me mentioning above, the planned cycle infrastucture on this road.....so exactly where is it going to go here? Having now built this pinch point, where exactly are they going to put the cycle infrastructure?

It gets worse though. I've heard from a reliable source that in this section of the road, this pinch and the surrounding shops are not to get any cycle infrastructure. The road either side of it will, but this section wont.

Feel free to slap you palm to your face at this point.

Yes, that's right. at the foot of a poster from our government telling us to grow up and not cycle on the pavement, is a section of road that will not have any cycle infrastructure on it. Cycle infrastructure will lead up to it from both directions, but it won't exist here. So what should inexperienced cyclists do here? Deal with the issues that a newly produced pinch point creates, or...dare I say it.....

Cycle on the pavement?

In effect, the picture above is glorious in the irony it contains. It contains a message to anyone using a bike to get on the road whilst at the same time demonstrating why some people actually chose not to cycle on the road.

I think this picture is cycle infrastructure equivalent of the recent Usain Bolt lightning bolt picture, without any victory.

So when you are out cycling, walking, or even driving around, have a look for these posters, and if you see one, take a picture of it and its surrounding cycle infrastructure. I suspect that that there could be many more like mine.